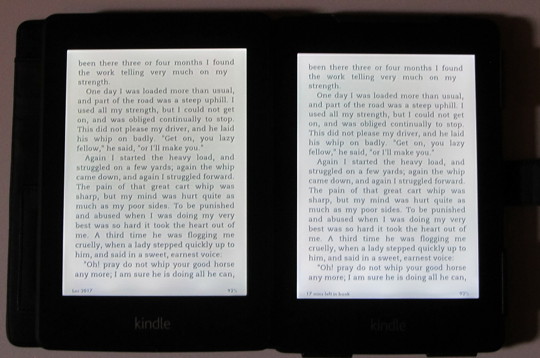 If Amazon could do it all over again, I bet they would decide to wait on releasing a frontlit Kindle until the frontlighting technology is better.

Looking over the reviews on Amazon and reading through the conversations in forums, there are countless reports of people exchanging their Paperwhite for a new one because of the aforementioned issues. Some people are on their 6th or 7th Kindle (by that time they might as well just give up and accept reality, because the reality is the Kindle Paperwhite’s lighting is never going to be perfect).

I received my replacement earlier in the week and am sure glad I decided not to send back the original until after comparing both side-by-side. The difference between the two is surprising.

Kindle Paperwhite? More like Kindle Paperyellow. That’s the story with my replacement Kindle.

I wonder if Amazon is experimenting with using different colored LED lights to try and minimize the issues with the screen lighting because the overall lighting on my original Kindle Paperwhite is much whiter than the replacement. Looking at both devices next to each other with the lighting turned all the way up, the replacement Kindle’s screen is noticeably yellower in tone.

I tried taking some pictures but I’m not a professional photographer so it proved to be difficult. You can kind of see the difference in the picture at the top of this post (the replacement is on the left), but I think the difference is more obvious in person.

Not only is the color more yellow on the replacement, the lighting seems less even and the discolorations more blotchy. There’s a really bright spot toward the bottom of the screen that’s almost as white as my original Paperwhite, and that makes the shadow waves at the bottom of the screen more obvious, not to mention the subtle changes in tone on other parts of the display.

Long story short, I’ll definitely be keeping the original and sending back the replacement. It’s surprising how much of a difference there is between the two. I can’t help but wonder where Amazon goes from here moving forward with their frontlight Kindles.