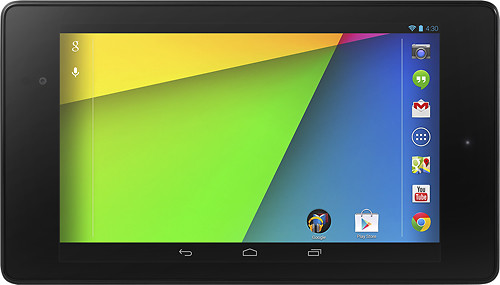 In one of the worst kept secrets ever, Google officially unveiled the 2nd generation Nexus 7 tablet today. Various leaks before the announcement revealed all the key details ahead of schedule, so there weren’t really any big surprises.

Google’s latest 7″ tablet runs Android 4.3 Jelly Bean and comes in three varieties, there’s a 16GB version for $229 and a 32GB model for $269, and a 4G LTE model for $349. Among the key features are front and rear cameras (1.2MP front and 5.0MP rear), Bluetooth, GPS, NFC, and wireless charging. The device has a quad-core 1.5Ghz Snapdragon processor with 2GB of RAM and an Adreno 320 graphics chip.

By far the most impressive feature with the new Nexus 7 is the screen. It has as an unprecedented 1920 x 1200 7-inch screen with an impressive 323 pixels per inch. By comparison, last year’s Nexus 7 has 216 ppi, and the Nook HD, which had the highest resolution screen of any 7″ tablet until now, has 243 ppi. The new Nexus 7 takes screen sharpness to an entirely new level.

The new Nexus 7 will be available starting July 30th from retailers such as Amazon, RadioShack, Walmart, and Best Buy. It is launching in eight countries initially with more to follow soon.

Check back soon for a full review of the new Nexus 7 tablet. I look forward to testing it out, especially from an ereading perspective, and not just ebooks but all forms of ereading, from PDFs to comics and magazines to web reading and everything in between.