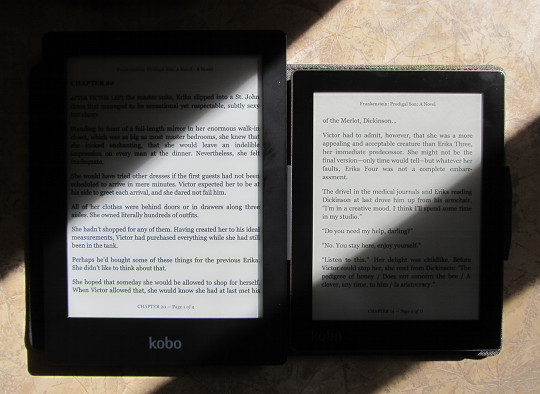 The Kobo Aura is the latest 6-inch ebook reader from Kobo. It has a really cool edge-to-edge screen that isn’t recessed in the front frame like other ebook readers. This gives it a sleek tablet-like look. It’s also the first Kobo ereader to use a capacitive touchscreen, which adds some extra zooming options and other features like being able to adjust the frontlight brightness by swiping two fingers vertically up and down the screen.

Both of these new features has its advantages, but I can’t help but wonder which of the two is making the Kobo Aura’s screen look different from previous models.

After getting past the initial enthusiasm of the exceptional look and feel of the new Kobo Aura ebook reader, the first thing that caught my eye was what appeared to be fine scratches toward the top of the screen. As I looked closer I noticed that they weren’t scratches but some sort of diamond pattern that goes across the entire screen, although it appears to be more visible toward the top.

Here are couple of closeup pictures that show the pattern on the Kobo Aura’s screen, followed by a couple of pictures of the Kobo Aura HD to illustrate the difference (click for bigger images):

When I started to compare the Kobo Aura with the Kobo Aura HD, I noticed that the Aura HD has a much lighter screen background color by comparison. Take a look:

I’m not sure what’s causing the degradation in screen quality on the Kobo Aura, but I can’t help but be a little disappointed with it. The darker background color doesn’t make the text any harder to read; in fact I didn’t even notice it was darker until I placed both units side-by-side.

But the visible pattern on the screen is harder to overlook. When there is sun on the screen like in the photos or other bright light shining on the screen the pattern is fairly obvious and somewhat distracting while reading. The good thing, though, is that it is virtually invisible under most lighting conditions and with the frontlight turned on.

I’m not sure if it’s a byproduct of the frontlight, the capacitive screen, or the way the screen was implemented into an edge-to-edge surface. All I can say is that I’ve never seen the effect before.

The Kindle Paperwhite uses a capacitive touchscreen and it doesn’t have a visible pattern. I think Amazon uses their own capacitive technology, though. Kobo may be using the screen packages from E Ink that already have the frontlight and capacitive screen built-in to the E Ink screen.

It’s hard to say where the issue is coming from. Like I said, it’s virtually invisible in most lighting conditions, but if you like reading outside in direct sunlight it is something to be aware of. And it’s not just an issue with this particular unit because there are numerous reports at MobileRead as well.

Please note that I’ll be posting a full review and video review of the Kobo Aura next week, and then I can start comparing it to the new Kindle Paperwhite, which is scheduled to start shipping in three days.