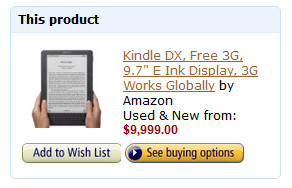 Occasionally I happen to come across something insanely expensive on Amazon that makes me question reality (like these $48,400 speaker wires) but never have I seen a ten thousand dollar Kindle.

Last week The eBook Reader Blog was the first to report that Amazon had stopped selling the Kindle DX, and it appeared that the device was likely going to be discontinued (again).

At the time, some third-party retailers on Amazon were selling the Kindle DX used for about $150 or so.

Now the used Kindle DX’s shown for sale at Amazon cost a mind-boggling $9999.00. There are several listings for an “Acceptable” condition Kindle DX from a seller named Cellular Stream.

One would have to be absolutely bonkers to pay that price, even if the decimal point was moved to the left one space.

Even some listings on eBay have been affected since Amazon stopped selling them. A new factory sealed Kindle DX is listed for $450, more than double what Amazon was charging just a couple weeks ago. But that’s not as bad as another vendor selling one for $2593.95.

Prices on eBay for used Kindle DX’s are still based in reality, at least. But there are very few listings. It’s surprising to see how fast the Kindle DX is disappearing, at a reasonable price anyway.