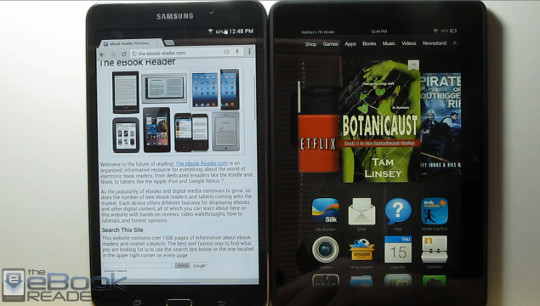 Recently I posted a review of the new 7-inch Samsung Galaxy Tab 4, and while I was at it I wanted to post a comparison review between it and the 7-inch Kindle Fire HDX to detail some of the differences between them.

Both are among the top brands for Android tablets, and both are very different devices, even though they can do many of the same things.

The biggest difference comes in terms of the software. The Galaxy Tab 4 runs open Android 4.4, and works seamlessly with Google’s apps and the Google Play store, whereas the Kindle Fire HDX does not—it remains almost entirely dependent on Amazon for content, and the software is much more closed down and is based on an older version of Android, 4.2.2 Jelly Bean.

Each device offers it’s own unique set of advantages. Here’s an outline of the main points to consider.

For this review I’m comparing the 7-inch models specifically, but most of these points apply to the larger models as well.