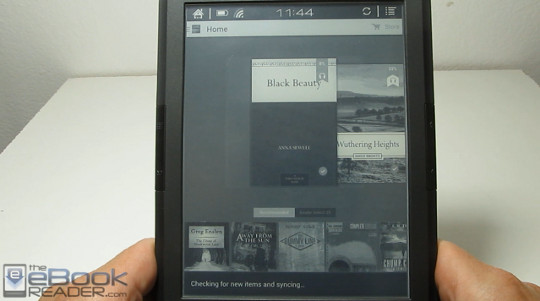 So one of the big questions with the Onyx Boox T68 ebook reader is if the Kindle for Android app works on it or not. This is important because it would make it one of the only non-Kindle E Ink ereaders to officially support Kindle ebooks out of the box, with no hacking required.

The Boox T68 Lynx runs open Android 4.0 so installing the Kindle for Android app is indeed possible. The app installs fine and does work but it’s a mixed bag.

There are some good things about the app on the Boox T68 and some bad. The biggest problem is that the Kindle for Android app is designed for tablets and phones with LCD screens. The interface has animations and colors that don’t translate well to E Ink. In fact using the onboard Kindle Store to shop is pretty much impossible with the current color scheme because things like the price disappear from view.

Reading Kindle ebooks works well enough to be functional, but there are some problems. First, the Kindle app uses animated sliding page turns. This doesn’t work well with E Ink so the text slides and looks all jumbled for a second while turning pages. Also, the screen never fully refreshes so the text loses definition and ghosting is more apparent, giving the text and background more of a dirty look.

Also, the Kindle App is prone to crashes. On several occasions the Boox T68 has shut down and restarted while using the Kindle app.

The page buttons on the right side of the Boox T68 don’t turn pages with the Kindle for Android app, but the wheel below the screen does turn pages.

The Kindle features all seem to work well enough to use: adding highlights, notes, activating hyperlinks, adjusting fonts, and looking up words in the dictionary and running searches all function as they should. The immersion reading audiobook feature works too. The Boox T68 doesn’t have a speaker but it has a headphone jack and supports Bluetooth speakers and headphones.