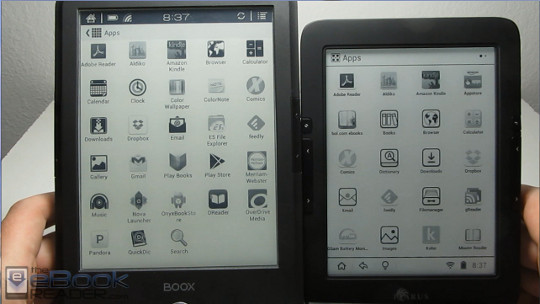 The Onyx Boox T68 and Icarus Illumina HD are both among the first E Ink ebook readers to run Android and openly allow the installation of Android apps.

Since I just got done reviewing each of them, there’s no better time for a comparison review. Below is an outline of the main similarities and differences between the Boox T68 and Illumina HD, along with a video to help illustrate these points.

From my experience testing the Onyx Boox T68 and the Icarus Illumina HD, both offer a similar overall user experience. The same apps can be installed on both of them, with a few exceptions. The T68 has some advantages with hardware, but the Illumina HD tends to suffer from less bugs and the software, while lacking Google Play access for apps, is more refined and smoother running.

There is no clear winner in this comparison. I think the perfect option would be to get the Illumina HD’s software onto the hardware of the Onyx Boox T68, with the added perks of Google Play access and the better default reading apps from the T68. That would be the best of both worlds.