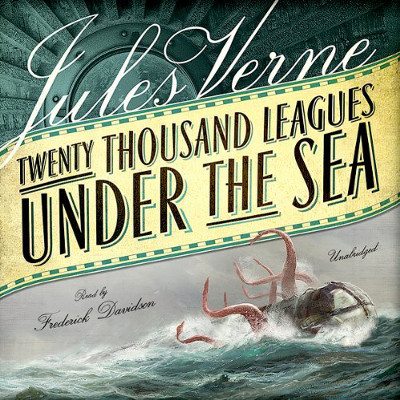 This month’s free Kindle ebook and audiobook combination is the classic Twenty Thousand Leagues under the Sea by Jules Verne.

After you “purchase” the ebook copy for $0.00, the professionally-narrated audiobook of Twenty Thousand Leagues under the Sea will magically drop from $11.95 to free.

I noticed that Amazon brought back the option to get the audiobook immediately after hitting the buy now button for the ebook (the last couple times it wasn’t there), which makes it a lot easier without having to go back and find the audiobook page.

Amazon is running this promotion where they give away a free ebook and audiobook combination each month to bring attention to their exclusive Whispersync for Voice feature that syncs Kindle ebooks and Audible audiobooks together using Kindle reading apps or Kindle devices that support audio (Kindle Fire, Kindle Keyboard, Kindle Touch).

Once you get the audiobook you can listen to it however you want, though; a Kindle app or device isn’t required. It’s just a way for Amazon to promote their Immersion Reading Whispersync for Voice feature.

This offer only applies to Amazon US. The recent expansion of Whispersync for Voice in the UK last month brought ten free ebook and audiobook combos, and the same titles remain free this month.

Here’s a brief description for 20,000 Leagues Under the Sea:

The year 1866 was marked by a unique incident, a mysterious and inexplicable phenomenon, and rumors agitated the maritime population and excited the public mind, especially seafaring men. Merchants, common sailors, captains of vessels, skippers, both of Europe and America, naval officers of all countries, and the governments of several states on the two continents, were deeply interested in the matter.

For some time past, vessels had been threatened by “an enormous thing”: a long object, spindle-shaped, occasionally phosphorescent, and infinitely larger and more rapid in its movements than a whale. Then, Captain Nemo decided to allow his submarine, the Nautilus, to be drafted into service on a hunt ahead of its time.