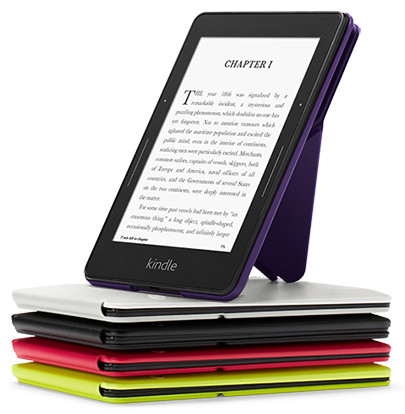 The Kindle Voyage might be overpriced, but there appears to be plenty of demand for Amazon’s latest new Kindle, as shipping dates for pre-orders continue to slip farther and farther away.

Three days ago when Amazon first started accepting pre-orders for the new Kindle Voyage, the release date was listed as October 21st. And if you paid for 2-day shipping you could get it delivered the day of release.

The initial shipping date didn’t last long before it started getting pushed back. Right now Amazon states on the description page that pre-orders placed now won’t ship until the week of November 24th, 5 weeks out from the initial release date.

That’s for the $199 WiFi-only Kindle Voyage with Special Offers. The wait time is even longer for the non-ad version. It doesn’t ship until the week of December 8th. However, there is no need whatsoever to wait for this model if you don’t want ads. Just buy the Special Offers version and then pay the extra $20 separately by going to the Manage Your Devices page at Amazon and choosing to unsubscribe from Special Offers.

When it comes to the 3G Kindle Voyage, it doesn’t appear to be as popular as the WiFi model, probably because of the hefty $269 price tag. The shipping date for it isn’t nearly as far out as the WiFi model. Right now Amazon shows an expected ship date as the week of October 24th, so that’s just a couple days beyond the official release day.

The non-Special Offers variant isn’t expected to ship until the week of December 8th, however, like the WiFi-only model. But since you can unsubscribe from ads separately anyway, it doesn’t make sense to wait for that one either.

All of the other new Kindle models, including the $99 Fire HD 6 and $79 Kindle Touch, still show the same shipping date as when they were first announced. The Kindle Voyage is the only one getting delayed shipments at this point.

Either demand is higher than Amazon expected or they just didn’t have many to begin with—you never know with Amazon because they never release any sales figures. Their best sellers list is about the only indicator that can give any kind of insight at all, and right now the Kindle Voyage is #3 on the list, right behind the Kindle Paperwhite and ahead of the Fire TV. Interestingly, the non-ad 3G Voyage is ranked higher than the Special Offers 3G version; I guess people figure if they are paying that much they don’t want advertisements.