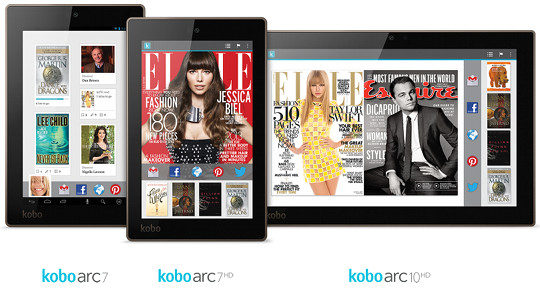 Last week The Bookseller published an article that reveals some interesting details about Kobo’s plans for the future.

According to Kobo president and chief content officer, Michael Tamblyn, Kobo doesn’t plan to make any new tablets. Instead they plan to focus on their dedicated ereaders, apps, and putting more effort into retail stores, at least with retailers in the UK.

Tamblyn also makes it sound like the Kobo Glo and Aura HD could be discontinued as well, saying that Kobo wants to concentrate on its three main ereading devices, the Kobo Touch, Kobo Aura, and the new Kobo Aura H2O.

The existing Kobo Arc tablets out there will continue to be sold, but Kobo has no plans to make new ones.

This is a similar strategy to what Barnes and Noble is doing with the Nook when they decided to stop making their own Nook Tablets and instead partner with other hardware manufactures to put the Nook app on other devices. Enter the Samsung Galaxy Tab for Nook, the tablet with the longest and most awkward name.

Kobo also looks to make a stronger stand in the UK with retailers like WHSmith, with plans to work more closely to promote the Kobo app and do more in-store promotions. Kobo still doesn’t have any retail partners in the US, and it doesn’t sound like they have plans to change that anytime soon, unfortunately. Kobo was once partnered with Borders in the US, but when they closed down Kobo basically gave up on the US market. Then Kobo partnered with Indie bookstores, but that proved to be a poor strategy to sell ereaders because very few stores actually carried any.