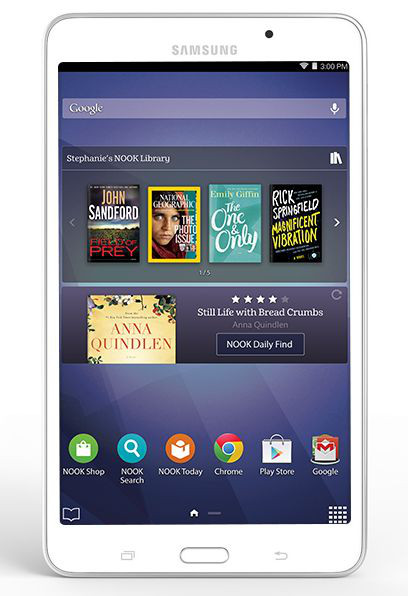 Today Barnes & Noble and Samsung introduced their new co-branded Galaxy Tab 4 Nook tablet. It’s basically a copy of the 7-inch Samsung Galaxy Tab 4 that I reviewed a few months ago, but with custom Nook software tweaks.

The retail price is the same as the Galaxy Tab 4: the list price is $199 but they are selling them for $179 from B&N.com. It’s available in white and black, and they are shipping right now.

B&N is giving customers an incentive to buy their new tablet by giving away $200 of free Nook content, plus a $5 starter credit.

The fine print indicates the following content is free:

That last offer is pretty lame for magazine trials, especially when you can get hundreds of free magazines from the local library without ever having to return them.

B&N doesn’t get very specific with the specs of the Galaxy Tab 4 Nook, but everything appears to be exactly the same as the regular Galaxy Tab 4. The IR blaster is even shown in the pictures, even though B&N does not mention the feature at all anywhere on the description pages. Below are the specs for the Galaxy Tab 4 since B&N is lacking in that department; presumably everything is the same for the Nook version.