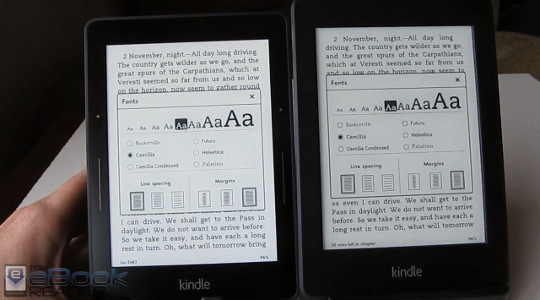 Now that the Kindle Voyage has been released, it’s time for a comparison review between it and the Kindle Paperwhite to see if the Voyage is worth spending an extra $80.

Both ebook readers have all the same software features. It’s the hardware differences that separate the two. Both have 1GHz processors and 4GB of storage space.

The early video review from CNET said the Kindle Voyage has double the RAM (512MB vs 256MB for the Paperwhite) but that’s seemingly unnoticeable. Overall speed and performance between the two devices is virtually identical.

There are six main differences between the Kindle Voyage and Kindle Paperwhite:

More comparison info between these two Kindles and all the other models past and present can found on the Kindle Comparison Table.