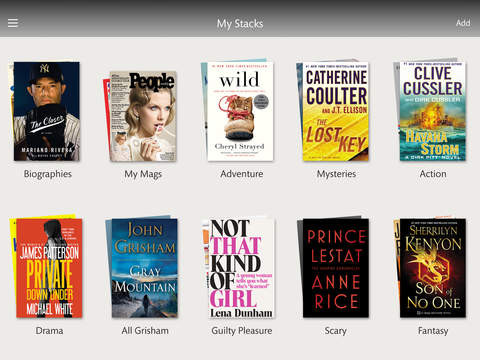 Barnes and Noble has finally updated their Nook App for iOS devices. It’s been almost a full year since the last update, so better late than never, I guess.

The new software version 4.0.0 adds support for iOS 8, Apple’s latest mobile operating system. It was released 3 months ago so it’s about time B&N added support for it.

B&N also added a few new features and made some changes to the user interface to increase speed and overall performance.

You can now test drive the Nook app without signing in, and it comes with three free magazines and three free ebooks.

A new sorting feature called “My Stacks” lets users organize their library by creating stacks of ebooks, periodicals, and personal files. The screenshot above shows an example of My Stacks.

Other new features include refresh to sync content, notifications for new books and magazines, full screen mode has been added for PDFs and magazines, and they made it so that you can send feedback by shaking your iOS device, so if the Nook app isn’t working how you want it just shake your device in frustration and a window will popup where you can tell B&N how you feel.