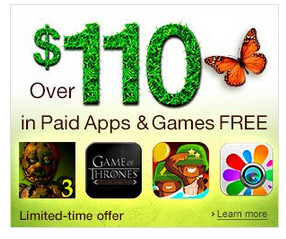 Once again Amazon is giving away a bunch of paid Android apps and games for free through the Amazon Appstore. Normally the apps sell for over $110, but from now until May 17th you can download as many of them as you want for free.

There are apps for kids, along with a few utility apps, a foreign language coach, and a remote desktop client

Like usual the freebies largely consist of games, but at least they picked good ones with mostly positive reviews, and there’s some stuff I haven’t seen offered before.