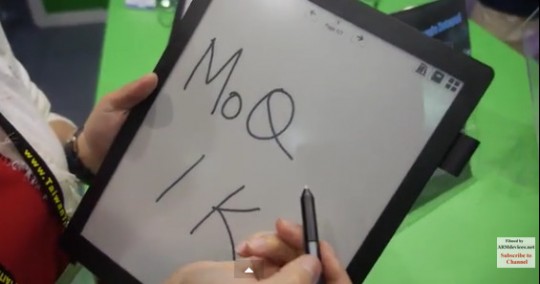 Netronix is demoing their 13.3-inch E Ink ereader and notepad at Computex 2015. We first saw Netronix’s new ereader back in January at CES.

It’s one of just a few devices to use a 13.3-inch Mobius screen, which has a resolution of 1600 x 1200. Unlike most E Ink screens, this one is plastic-based, so it’s much lighter and more durable than typical E Ink displays.

The device runs Android 4.0.4, but it’s unclear if it can easily install Android apps.

Netronix is still looking for partners to distribute the device, along a similar 6.8-inch model.

The 13.3-inch version looks like it could be good competition for the Sony DPT-S1, Sony’s 13.3-inch dedicated PDF reader, which recently dropped in price by $200 to $799.

Hopefully we’ll see these Netronix devices getting released later this year, and at a lower price point than Sony.

Mostly the video below just focuses on the handwriting features, but the earlier video goes into more details about other features, including reading ebooks.