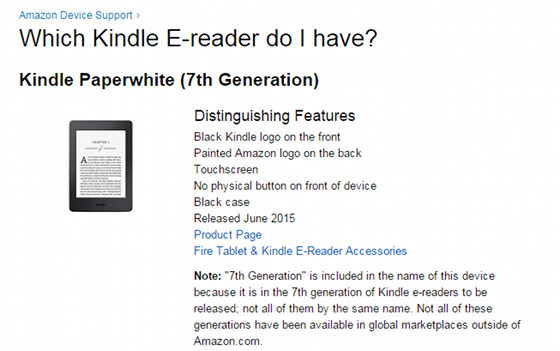 The other day I came across an interesting page in Amazon’s Kindle help section that I haven’t seen before.

The page is called Which Kindle E-reader do I have?

It lists all seven generations of Kindle ebook readers, including all the different models that have been released since the Kindle was introduced in 2007.

For each Kindle model there’s a list of distinguishing features to help users tell them apart.

However, they don’t give a lot of specific details when it comes to determining the three different generations of Kindle Paperwhites from one another. If you’re having trouble with that, check out this separate How to Tell Kindle Paperwhite Generations Apart guide.

Amazon also shows the release date for each Kindle on the list, which is kind cool because it outlines the history of the Kindle.

Amazon’s pattern of release dates have been very consistent. They’ve released a new Kindle every fall since 2009. So far they’ve left us hanging this year. It’s almost the start of November and there’s still no word of a new model getting released anytime soon…