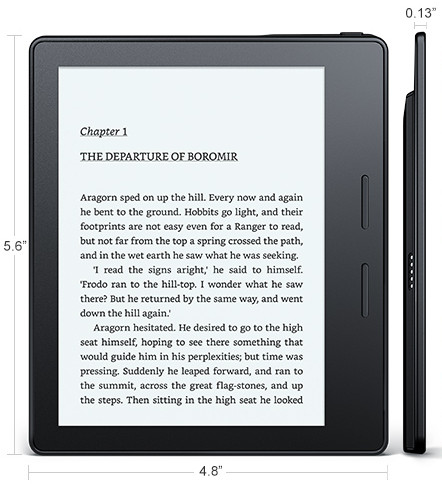 The Kindle Oasis is Amazon’s 8th generation Kindle and it’s their first model to feature an offset, tapered design.

It’s also the first Kindle to come with a cover that has a built-in battery to help extend battery life and take some weight away from the device itself by keeping its internal battery smaller.

The overall design and concept of the Kindle Oasis is a fairly drastic change from previous models.

So let’s go over the pros and cons of the Kindle Oasis and see how it compares to the other three current Kindles.

This is a preliminary review and comparison. Check back after the Kindle Oasis gets released on April 27th for full hands-on reviews and comparisons.

Charging Cover Included – The Kindle Oasis is priced high because it comes with a premium leather charging cover that probably accounts for about one third of the overall price. The cover has a battery that charges the Kindle and extends battery life to a couple of months. The cover has auto sleep/wake functions and it comes in three color choices, black, merlot, and walnut.

Improved frontlight – One of the biggest complaints with the Kindle Voyage was the inconsistent frontlight, so Amazon has added 4 additional LED lights (10 total) to the Kindle Oasis to help improve the lighting.

New Design – The tapered design centers most of the weight on the palm of your hand to make the device feel lightweight and comfortable to hold one handed for long periods of time. At 4.6 ounces the overall weight is 20% lighter than other Kindles (see comparisons below for numbers) and the slimmer profile is 30% thinner on average, says Amazon (except they neglect to mention the part you’re actually holding is thicker than the Kindle Voyage).

Page buttons – It’s somewhat surprising to see dedicated page buttons make a return on a premium Kindle after the Kindle Voyage featured sensors but a number of people really like page buttons so it’s good to have that option again. Plus the screen automatically rotates so you can use the buttons with either hand.

Glass Screen/Metal Frame – The Kindle Oasis has a flush glass micro-etched screen and a frame infused with metal using structural electroplating to help make it stronger while keeping it lightweight.

High Price – Somehow Amazon found a way to sell a 6-inch ereader for $300 in 2016 (not an uncommon price a few years ago) when they themselves frequently sell the Kindle Paperwhite 3 with the same exact E Ink screen and software as the Kindle Oasis for $99. The moral of the story is don’t expect a budget price for what Amazon describes as a premium top-of-the-line ereader. Whether anyone else shares the same opinion doesn’t matter because they think it’s the bee’s knees and they’re going to charge the most they think people will pay for it (kind of the opposite approach to their budget devices).

Same Screen – If the Kindle Oasis would have been an 8-inch model for $300, I think it would have been massively popular. The fact that it has the same exact 6-inch 300 ppi E Ink Carta display as the Kindle Paperwhite 3 and Kindle Voyage is a huge “No Deal” for most people. For existing Kindle owners the screen gives little incentive to upgrade, or to choose to pay a premium when the cheaper versions have the same tech.

Not Waterproof – With names like Voyage and Oasis, you’d think at least one of them would be waterproof, but sadly there’s still no waterproof Kindle. The aftermarket Waterfi Kindles are still the only option. It looks like Amazon is happy to leave Kobo and B&N with the waterproof segment of market.

Weird Design – Some people won’t like the new asymmetrical, tapered design and the fact that you have to use a specialized cover to get the most out of the battery life.

Nothing New – Aside from the charging cover, there really isn’t anything new about the Kindle Oasis when you get right down to it. The design isn’t new. Tapering has been done before with tablets and a number of ereaders have had buttons on one side of the screen in the past, like the PocketBook 360+, which was quite nice actually (and it also had a unique cover).

Amazon has new comparison tables up on their website with the Kindle Oasis and current models in a lineup. There’s a picture embedded below.

It’s interesting comparing the size of the Oasis to the other models. It’s quite a bit shorter and wider, except it’s not all that much wider than the entry-level Kindle Touch, just 3 mm. The height difference is a considerable 26 mm.

It’s kind of strange that they didn’t include the automatic light sensor on the Kindle Oasis like on the Kindle Voyage. That and the page sensors with haptic feedback give it its own unique feature-set.

It’s still hard to argue the fact that the Kindle Paperwhite 3 remains the best Kindle in terms of overall value, especially when it goes on sale for $99 (which will probably happen in about two weeks when Mother’s Day rolls around).

Additionally, here’s a link to More Kindle Comparisons with a list of all the models past and present, with some different sections than the table below. 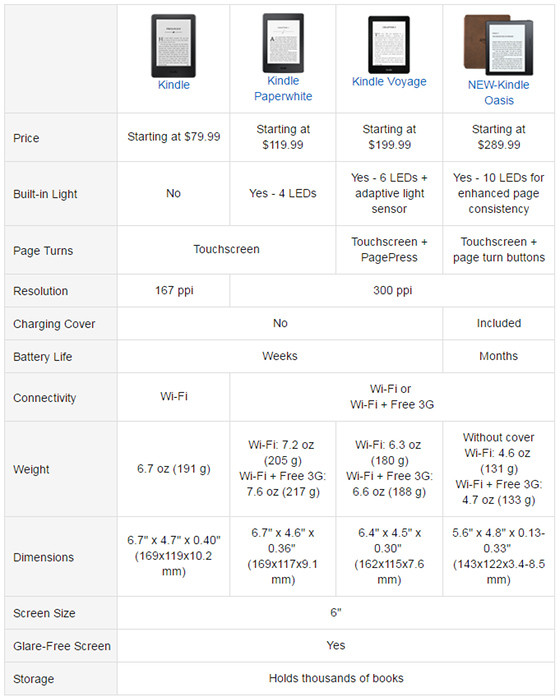