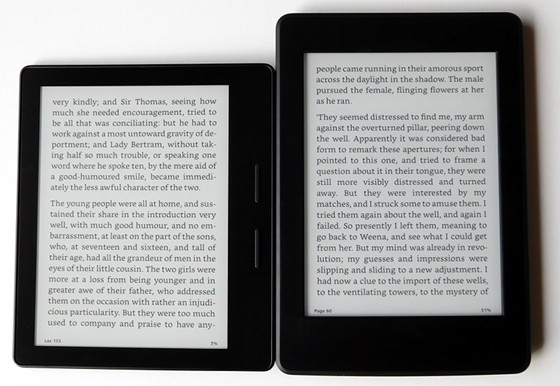 I ordered one to review, of course. But it’ll be a couple of weeks before I post a full review since I like to actually use a device for awhile before reviewing it, unlike some websites where they post a review by someone who doesn’t even regularly use ereaders or know the difference between a frontlight and a backlight. 🙂

In the meantime I wanted to post some first impressions of the new Kindle Oasis.

I’ll also be posting some videos and a comparison between it and the Kindle Paperwhite 3 in the coming days, so check back soon for that.

One thing I want to test for the full review is the battery life of the Kindle Oasis itself without the cover.

I’m going to charge it fully and then count the hours of usage it takes until the battery needs to be charged since Amazon always dances around giving useful battery life numbers.

Three things jumped out about the Kindle Oasis upon first inspection.

#1. Tiny – Seeing pictures online does not give an accurate representation of just how small the Kindle Oasis is, especially when comparing it side-by-side with a normal-sized ereader like the Kindle Paperwhite 3. It’s funny how a two devices with the same size screen can be so completely different. The cover is also very slim and light, smaller than I’d expected. It’s just a flap with half a back that’s a bit thicker for the battery.

#2. Nice Frontlight – The frontlight is nice and even. At the highest setting it’s brighter than the Paperwhite and I’m not seeing any weird hues of color like on the Kindle Voyage, although there is a bit of visible shadowing from the LED lights on the right side of the screen when the brightness is turned up high. It’s the best Kindle screen yet, even if it is just marginally better.

#3. Super Comfortable to Hold – The design is no joke; this time it’s not just marketing BS. It actually does make the Kindle Oasis super comfortable to hold. The hump isn’t as big as it looks in pictures, and your fingers naturally curl behind the lip, with a thumb resting on a page button.

It’s also quite comfortable to hold in landscape mode resting in the crook of your hand with a thumb on a button. Plus the buttons actually work in landscape mode unlike the page sensor buttons on the Kindle Voyage. 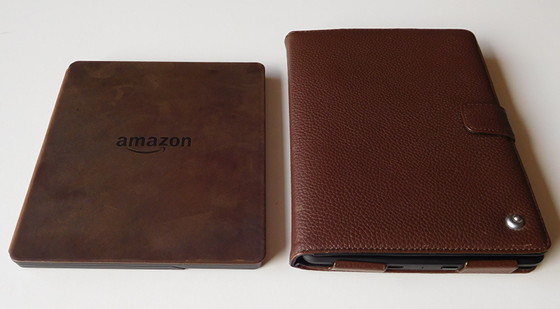 The cover folds back nicely as well so it’s still comfortable to hold with it on, but it’s not as light with it on of course and the balance isn’t quite the same since the battery on the cover evens out the weight distribution. It makes it feel more like a regular ereader with the cover on, but it is considerably smaller in the case than other ereaders, as the picture above illustrates.

Most people will probably prefer to shed the added weight of the cover when reading. That’s why I want to test the battery life of the Kindle alone. Check back soon for more details!