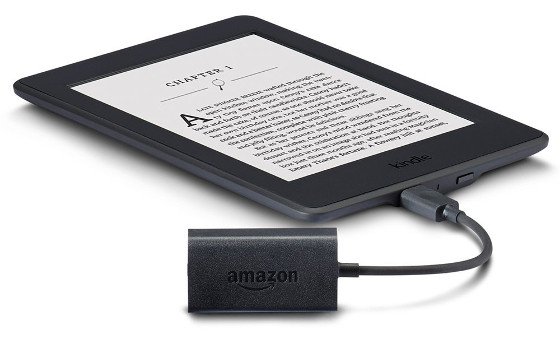 At least that’s what many of us thought at first. More accurately, Amazon has brought accessibly features to Kindle ereaders in the form of VoiceView; text-to-speech just happens to be a by-product of this feature.

Unlike Fire tablets, TTS cannot be used independently from the VoiceView feature, so the Kindle Audio Adapter is really only meant to be an accessibility tool for blind and visually disabled people.

For regular folks that just want to have TTS support on their Kindle, it’s really more trouble than it’s worth to use.

VoiceView makes it so you have to navigate the Kindle with a series of swipes at double-taps. The voice reads aloud menus, selections, and everything as you swipe and tap the screen.

You don’t actually have to double-tap the highlighted icons like in the video—that’s just force of nature on my part—you can double-tab anywhere on the screen to make selections.

It’s all rather tedious and awkward if all you want to do is use TTS to listen to Kindle books.

You can bypass many of the VoiceView features by just unplugging the adapter when navigating and using the menus on the Kindle, and then plugging it back in after opening an ebook, but that’s not a very convenient way of doing things just to be able to use TTS.

As I posted about earlier, a $50 Fire tablet works much better for simply listening to text-to-speech than having to use a $20 dongle on a $120-$300 Kindle.

With Fire tablets you can easily toggle TTS on and off from the menu without having to use VoiceView, battery life is longer, there’s Bluetooth support for wireless headphones and speakers, and there are a bunch of additional voices that you can download.

Plus the VoiceView feature makes an audible noise whenever it turns pages, which doesn’t happen on Fire tablets when using TTS. Another annoying habit with VoiceView is that it always starts reading from the top left of the page, whereas TTS on the Fire starts back up exactly where you left off last time.

The KAD offers just the one voice, which is pretty good for TTS, but it uses’s the Kindle’s battery so it can only churn out about 6 hours of playtime for audio. With the adapter connected, you can choose from different speed levels to customize the rate of speech from the settings menu, and you can adjust the volume from there as well and go through a tutorial that demos the VoiceView features.

So basically what it all comes down to is a Kindle is better for reading ebooks and a Fire tablet is better suited for text-to-speech. That’s been the case for some time, and is likely be design.

The Kindle Audio Adapter is a standalone accessory that can be purchased separately for $19.99 or as part of a bundle with the Kindle Paperwhite 3, in which case it comes with a $20 credit so it’s essentially free.

The adapter doesn’t work with all Kindles, just the Kindle Paperwhite 3, the Kindle Voyage, and Kindle Oasis. The TTS software requires 512MB of RAM and the earlier models don’t have that much. You can download the voice files from Amazon if your Kindle doesn’t have them.

The audio support only extends to VoiceView and text-to-speech, not music or audiobooks.

This video below shows how the Kindle Audio Adapter works and demonstrates the text to speech features. Fast forward to 2:08 if you just want to hear how the voice sounds.