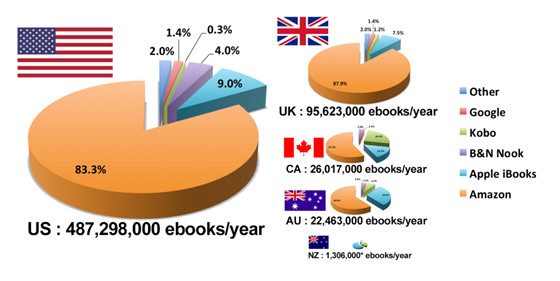 The Author Earnings website recently posted a breakdown of total ebook sales by country for the top 5 English-language markets.

That includes the US, UK, Canada, Australia, and New Zealand.

Overall Amazon accounts for over 80% of English-language ebook purchases.

Apple ranks second with 10%, and Nook accounts for 3% and Kobo just 2%. The remaining 3% goes to Google and other sources.

It’s really surprising how poorly Google ranks in sales considering the fact that their Play Books app comes pre-loaded on pretty much every Android tablet and phone, and it can’t be uninstalled.

Conversely, Apple is doing pretty well with iBooks being the de-facto ebook app on iPads and iPhones, especially considering those ebooks are permanently locked into iDevices and cannot be read on other devices or ereaders.

Another interesting detail is the report indicates nearly 500 million ebooks are sold in the US per year. That’s a lot of ebooks!

Amazon accounts for 83.3% of ebook sales per year in the Unites States, and the percentage is even higher in the UK at 87.9%

In Canada, Amazon’s market share is smaller but they still manage to sell more than twice as many ebooks as Kobo, which is kind of surprising considering Kobo is based in Canada.

Check out the Author Earnings report for more details, percentages, and a bunch of nifty pie charts.