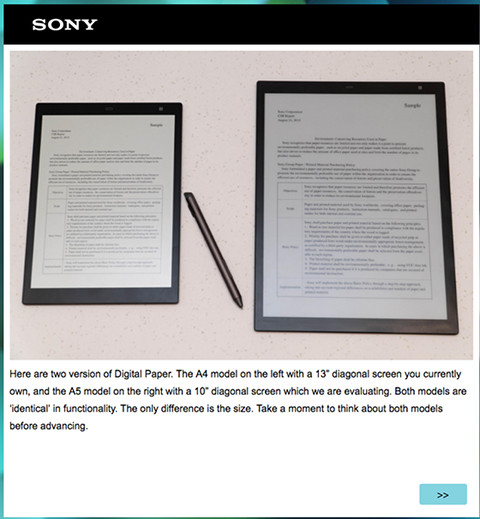 For a company that got out of the ebook market, Sony just can’t quite seem to let go of making ereaders with E Ink screens.

Sony’s last PDF-specific device, the DPT-S1, was unceremoniously discontinued last fall, and it looked like that might be the end of Sony’s E Ink ereaders, but now some evidence has turned up that suggests Sony might be working on a new large-screen reading device, possibly the DPT-S2.

The above picture was posted over a MobileRead and it supposedly came from a survey that Sony sent out.

There are a couple fishy things about it, like the caption has the two devices inverted, and the fact that it was the person’s first and only post on the forum, but it’s unlikely anyone would go through the trouble to fake something like this.

If the survey is indeed real, it looks like Sony is toying with the idea of introducing a smaller 10-inch version of their dedicated PDF reader.

That would make sense considering a few other companies have plans to release 10.3-inch ereaders in 2017, like the reMarkable and Boyue T103.

One interesting detail in the picture is how much lighter the screen background appears on the smaller 10-inch device to the left. It looks like a pretty big improvement in terms of contrast over the 13.3-inch Mobius screen on the right.

What do you think? Should Sony release a 10-inch version of their specialized PDF reader or should they stick with 13-inch screens?

Currently 9.7-inch ereaders like the Boox N96 sell for about half the price of the 13.3-inch Onyx Boox Max so that certainly figures into the equation as well.