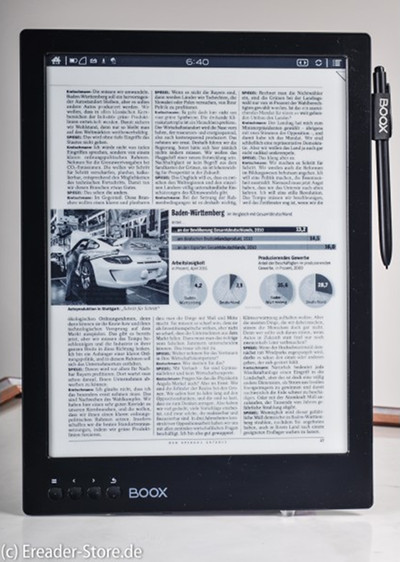 Earlier this month some rumors started surfacing about a new Onyx Boox Max with a higher resolution screen coming out soon, along with a Max 2 later in the year with some hardware upgrades.

Things must be moving along smoothly because one of Onyx’s authorized resellers, eReader-Store.de, has started taking pre-orders for the Onyx Boox Max Carta.

It’s expected to start shipping on April 20th, so that’s just a few weeks away.

That’s about $40 more than the 1st gen Onyx Max is selling for from Banggood right now so it’s not a huge difference.

The new Onyx Boox Max Carta appears to be the same as the original Max, except it comes with a higher-resolution Carta screen that also has better contrast than the Mobius screens used on the original.

The Carta is still plastic-based like the Mobius so that it’s very lightweight and durable, which is more important with a large 13.3-inch screen than a typical 6-inch screen.

The other specs are the same as the original Max. It comes with 16GB of storage space, there’s a memory card slot, it has Bluetooth 4.0 and Wi-Fi, there’s a stylus for taking notes, it supports audio and TTS, and it runs Android 4.4 and can install various Android apps.