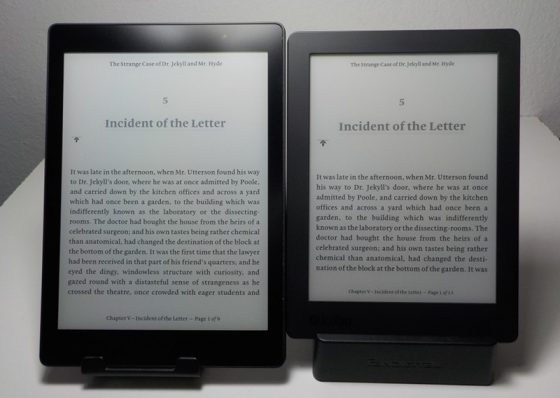 The second generation Kobo Aura H2O was released this past week, so let’s go ahead and see how it compares to the larger Kobo Aura One that was released last fall.

As mentioned yesterday in the Kobo Aura H2O first impressions review, I feel like the Aura One is the far superior device, with a nicer design and a clearer screen.

I posted a quick video comparison below showing the two models side-by-side for a closer look at the difference in size and overall quality.

To me, the Kobo Aura One is one of the best ereaders to ever get released. I really like the larger screen and the overall design—plus the OverDrive integration is super convenient.

I was expecting the new Aura H2O to be a smaller version of it but that’s not how things turned out at all.

I didn’t mind the cheap plastic frame on the lower end model, which sells for $119 and frequently goes on sale for $99, but I was expecting better from a higher-end model that costs $179 USD.

The Aura One is simply a lot nicer to look at and to hold with its flush glass screen and leaner frame. It’s 2 mm thinner, which doesn’t sound like a lot but it feels like a lot. The Aura H2O weighs about 23 grams less but the more compact design actually makes it feel a little heavier in the hand than the Aura One, an unexpected twist.

Aside from the screen, the internal hardware is virtually identical between the two models so there’s not much to say there. They have the same processor, the same storage space, the same amount of RAM, etc, and both are waterproof with an IPX8 rating.

The software between the two models is identical as well, with one exception: the Kobo Aura One supports OverDrive directly so you can download library ebooks for free from public libraries through the Kobo store. So far the Aura One is the only device to offer that feature, and it’s a really nice feature to have. Other Kobos require sideloading library ebooks with a computer, which requires several extra steps.

Design – The Aura One has a premium design with a flush glass screen and it’s surprisingly thin and light for the size. The new Aura H2O on the other hands looks and feels more like a budget ereader because of the cheap plastic bezel.

Frontlights – Even though both Kobos have frontlights with adjustable color temperature, the colors are a lot different between them at both ends of the spectrum (see video starting at 1:40). The Aura One also has a wider range of brightness settings and it adds a brightness sensor to automatically adjust the frontlight based on the amount of ambient lighting available.

OverDrive – The Kobo Aura One has OverDrive support built-in to easily download free library ebooks directly to the device without having to use a computer or other device.