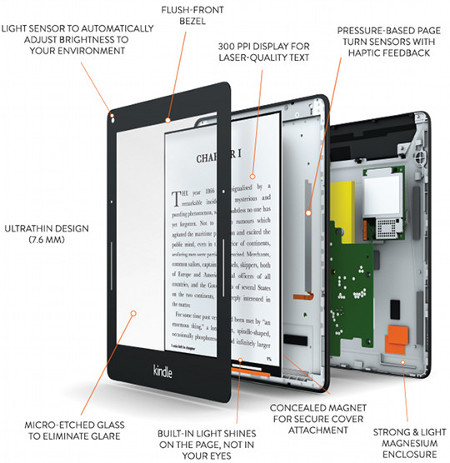 Have you ever wished you could design your own Kindle to make it exactly how you wanted?

In recent years the Kindles have really plateaued in terms of hardware features and overall design, especially compared to their competition, which is a real shame because a lot of ereaders are nicer than Kindles and have better hardware, but they don’t support Kindle ebooks so Kindle users are stuck with whatever Amazon chooses to give them.

Take the Kindle Paperwhite for example. It’s had the exact same design since 2012.

They put a new screen in it and made a few minor hardware changes from gen 1 to gen 3, but overall it’s been 95% the same for the past 5 years.

There’s nothing wrong with the Paperwhite’s design exactly, but there’s nothing unique about it either, and after 5 years it’s quite a bit larger and heavier than other 6-inch ereaders available today.

I reviewed the InkBook Prime earlier this year and to me its design is miles ahead of the Paperwhite, and it sells for the same price. Granted it has a lower resolution screen, but it has a flush glass screen with page buttons on each side, and it weighs an impressive 37 grams less than the Paperwhite, making it more comfortable to hold. It also adds a memory card slot, Bluetooth, 8GB of storage space, and it has a quad-core processor. If I could somehow replace the Android software with Kindle software I would never use the Paperwhite again.

The Kindle Oasis was supposed to be the next big innovation with its unique tapered design and charging cover, but the insanely high price put most people off, including myself, especially when you can get a Paperwhite on sale for a third of the price with the exact same screen and the exact same reading features. The Oasis simply doesn’t have enough unique features to justify the higher price; the unusual design alone isn’t sufficient.

The Kindle Voyage has a nice design if you don’t mind page sensors instead of buttons but the device is 3 years old now. It’s rare for ereaders to remain on the market for that long without an update.

If I could design the perfect new Kindle it would be a lot like the Kobo Aura One with a 7.8-inch 300 ppi screen, except I would add physical page buttons on each side of the screen like the InkBooks have. I also like the feature where you can disable the touchscreen to avoid accidental presses. That’s basically all I would need for the prefect Kindle. I know some people would like if they added audio support, expandable memory, waterproofing, and adjustable frontlight color, among other things, but I would be happy with just a larger display and real page buttons.

What about you? If you could design your own perfect Kindle what would it be like?