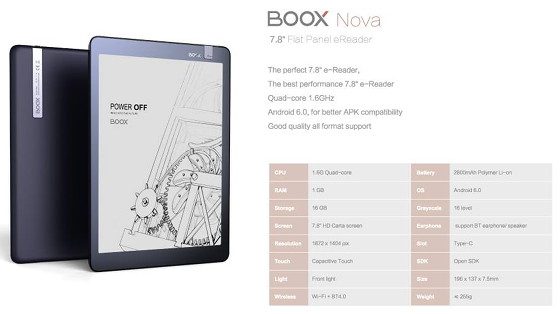 Onyx has some new E Ink reading devices that they’re showing off at the Hong Kong Electronics Fair.

They posted some pictures of the new devices for 2018 on their Facebook page, with a list of specs for each.

A couple models have already been released, like the Onyx Boox Max2 and Boox Note.

They also have the Boox Kepler among the models pictured but it’s not new by any stretch of the imagination so it’s getting booted from this list.

So far there’s been no specific release date given for any of the upcoming models.

Here’s the list of new Onyx devices expected in 2018.

The Onyx Boox Max 2 was released a few months back, technically at the tail end of 2017, but let’s include everything new on this list for the sake of comparisons.

This appears to have the exact same hardware as the Max2 but with more storage space and it has a white housing instead of black. It’s being marketed as a score reader and the description says it has auto page-turning with piano rhythm. There’s a very similar device called the PadMu that’s already available in Europe.

The Onyx Boox Note was just recently released a couple weeks ago. It’s not selling in the US yet but it’ll likely be available on Amazon within the next month. It’s already selling on Amazon UK and other European Amazon websites.

The Boox Note S looks like it’s going to be a less expensive version of the Note, and an upgraded Boox N96 with better hardware and newer software. Plus it adds the option for a frontlight on a larger screen.

The Boox Nova is the first ereader from Onyx to feature a 7.8-inch screen. It has a flat front panel and a nice-looking design (pictured above). Here’s a video showing the Boox Nova prototype from a few months ago.

The oddly-named Boox Poke is a 6-inch ereader with Onyx’s latest software and some upgraded specs.