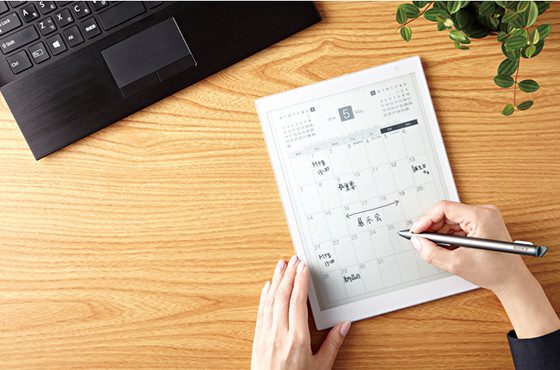 This new model is expected to get released in early June in Japan, and if last year is any indication it could get released in the US a couple weeks later, although there’s been no official word yet.

Aside from the screen size difference, the specs on the Sony DPT-CP1 are identical to the RP1.

It has the same quad-core processor and it comes with 16GB of internal storage space, with no memory card slot. It has dual-band Wi-Fi, Bluetooth 4.2, and an NFC chip.

It has a capacitive touchscreen for finger touch, along with a stylus pen to write notes and make highlights.

The software is most likely 95% the same as the RP1, but hopefully it comes with some updates. One thing mentioned on the features list is a smartphone app to transfer content. That’s a plus because the RP1 could only have content transferred from a computer.

One of the most impressive things about the Sony DPT-CP1 is the fact that it only weighs 240 grams. That’s over 100 grams lighter than the RP1, and it’s also over 100 grams lighter than the Remarkable paper tablet, which has same size 10.3-inch screen. In fact the 6-inch 3G Kindle Paperwhite weighs 217 grams, so 240 grams is really impressive for a device that large.