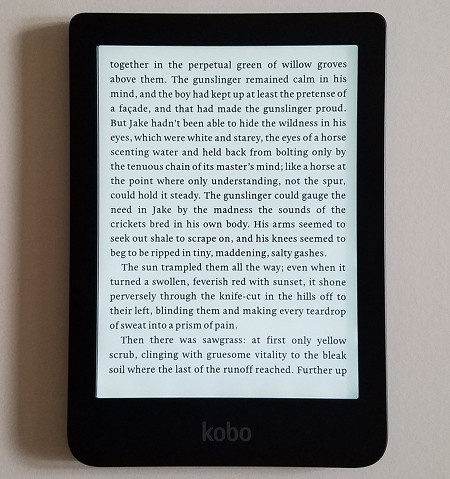 A number of people have left comments on this blog over the past week about the new Kobo Clara HD suffering from a light bleed issue with the frontlight.

Light bleed is an LCD problem so the term might not be exactly correct in this instance, but it basically results in a similar effect where parts of the screen appear brighter than others.

Uneven frontlights are nothing new.

In fact I’ve never seen an ebook reader with a perfectly uniform frontlight; they all seem to have some level of fading or shadowy areas somewhere.

Imperfections are easier to spot with the frontlight turned all the way up in a dark room, but usually at lower brightness settings in normal reading conditions they’re hard to see.

The Clara HD that I ordered from Chapters finally arrived (it got held up in customs for a week), and I was eager to see what its frontlight looked like after hearing about the light bleed issue for the past week.

My take on it is that it’s not as bad as I had expected. Perhaps I got a unit that doesn’t suffer from the problem as bad; frontlights can vary a lot from one to the next, even with the same model.

I would consider the overall uniformity of the Clara HD’s frontlight to be about average with other ereaders in its price range, perhaps a bit below average. The bottom portion of the screen where the lights are located is slightly brighter than the upper half of the screen. The effect seems to be less noticeable when using the yellow lights than it is when using the blue lights. 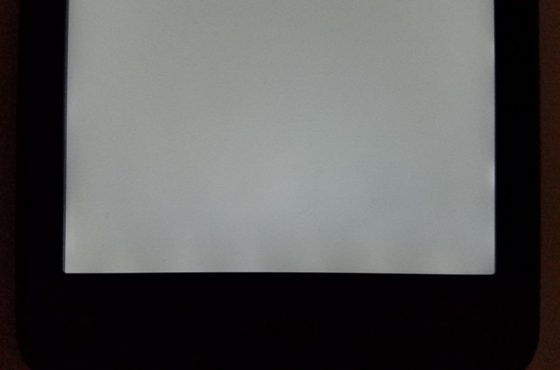 As you can see in the picture above (click photos for larger images), I can see why people would call it light bleed. There are subtle brighter spots in the corners and along the edge of the screen, especially at the bottom where the LED frontlights are located. There appears to be 13 of them tucked under the bezel, 7 blue and 6 orange. The downside with so many lights is they produce more shadow cones along the bottom of the screen than usual, which gives it kind of a bleeding effect—it’s the same story with the Nook Glowlight 3, except its lights are at the top.

For me it’s hard to see under normal reading conditions with the light turned down to a subtle level for reading, but the bright spots do stand out more under certain conditions, depending on how you’re using the frontlight and the amount of ambient lighting. Here’s a picture with frontlights turned all the way up in a well lit room: 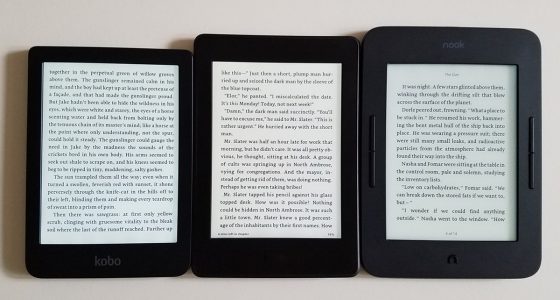 The Kindle Paperwhite’s frontlight with its 4 LEDs appears more uniform to my eyes, although it has shadowing at the bottom too, but the Nook GlowLight 3’s light has more bright spots and shadowy areas than both the Kindle and Kobo. The imperfections are more apparent in a dark room:

If you’re the kind of person that’s sensitive about frontlight uniformity you might want to pass on the Clara HD, but I don’t see it being a big issue. It’s just the nature of frontlights unfortunately. My expectations have gone down over the years, and now that they’re adding multi-color frontlights it’s just increasing the likelihood of more problems.