With all the money being spent this Cyber Monday weekend, it’s time to get something for free, so here’s a roundup of 10 free Kindle books.

Amazon is also running a big sale on Kindle eBooks for Cyber Monday for one of their Deals of the Day. There are over 350 books on the list and they’re priced up to 80% off.

So far this year Amazon’s Black Friday and Cyber Monday Kindle deals have been a total joke. $79 for the Kindle Paperwhite 3 is a good deal, especially without ads, but that’s the only Kindle deal they’ve offered.

Would it kill them to take $30 off one of the current Kindle models? They’ve had the new Paperwhite 4 on sale at Amazon UK for the past week but it’s still full retail in the US.

Keep an eye on the Kindle Holiday Deals page for new deals, but at this point I don’t know why they even bothered to create a dedicated page for a few measly deals.

Last year they had several Kindle models on sale, including refurbished Kindles, and they had Kindle Unlimited subscriptions for 40% off. This year all we get is a discount on an older model that has just been replaced. Prime Day deals were better than this.

Please note that the free Kindle books listed below are free as of November 25th, 2018. Most of these titles are free for a limited time only and will expire in a few days before going back to the regular list price.

More Kindle Books up to 80% off

These Woot deals on refurbished Kindles don’t usually last very long, but these were the active deals on Sunday morning:

The Firethorn Crown by Lea Doué

Plagued by her mother’s matchmaking attempts, Princess Lily, the eldest of twelve sisters and heir to a mighty kingdom, struggles to prove herself worthy of her inheritance while avoiding the attention of unwanted admirers. Tradition forbids marriage with the man she loves, so she would rather rule alone than marry someone who only wants the crown. Fleeing an overzealous suitor, Lily stumbles into a secret underground kingdom where she and her sisters encounter a mysterious sorcerer-prince and become entangled in a curse that threatens the ones she loves most. She must find a way to break the curse before time runs out, or risk sentencing herself and her sisters to a lifetime of darkness.

When Addison Lockhart inherits Grayson Manor after her mother’s untimely death, she unlocks a secret that’s been kept hidden for over fifty years. For Addison, it seems like she’s finally found the house of her dreams, until the spirit of Roxanne Rafferty comes to call. Who is Roxanne, why is she haunting Grayson Manor, and how will Addison’s connection reveal a secret to her own past that she thought no longer existed? 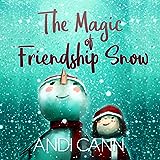 The Magic of Friendship Snow by Andi Cann

Making friends is hard! Once you find a friend, how do you BE a friend? For every child who struggles to make friends and parents who try to show them how, this book celebrates the special bond between friends. Jojo looks around and everyone seems to have friends but her. She feels sad and lonely. Then, Jojo meets Puddles, the snowman made with magic friendship snow. Jojo will reassure children that friendship can be learned. Discover how Jojo makes a forever friend by reading this book.

I’m Trisha. I’m 32 years old, accident-prone, a church secretary, and still single. Never-been-on-a-date kind of single. But that doesn’t mean I’ve never been in love. Until I find the second love of my life, I’ll always have my memories of summers past with Aaron, the guy of my dreams, chasing fireflies at twilight. Compared to him, the options at the Highpointe Baptist Church’s singles group just add insult to injury. But my stable pastor’s kid’s life takes an extraordinary turn when a misunderstanding lands me in jail, and that’s where I meet Jordin, a young prostitute. Her troubles make my life look like a dream, and I can’t help but feel that I need to help her in any way possible…

So you think you’ve got problems, meet LAPD Detective Kate Sexton and her canine partner, Bernie. Thirty years after Kate’s father was murdered in cold blood his killer is back and he’s coming for her. After the department decides to temporarily assign her to work with the FBI to get her out of harms way, Kate soon learns that things have gone from bad to worse when she’s assigned to help track down, The Artist, one of the most deranged and sadistic serial killers in the history of the agency. As The Artist’s killing cycle approaches, Kate teams with hard-headed FBI agent Joe Dawson who has recently come out of retirement to work the case…

He made me a promise. And then he broke it. That’s what happens with your first love. I didn’t expect for Derek to fall back into my life and for me to fall back into his bed. Time changes a lot of things, but it doesn’t change everything. It doesn’t change the way he makes my heart skip or the way my lungs stop when he stares deep into my eyes.
It didn’t change his bad boy ways either and I should be smart enough to tell him no this time around. I should be, I know what it’s like to be burned by him. But it’s so hard to walk away when his touch begs me to stay and the pain in his eyes cuts me deeper than anything else in this world.

Guitar: How to Memorize the Fretboard by Joseph Alexander

Unlike the piano, the same note can be played on the guitar in more than one location making their locations seem daunting to learn. This book teaches you to instantly recognize and know the location of every note on the guitar neck. How to Memorize the Guitar Fretboard teaches you essential basic theory and musical patterns so you actually understand how the guitar as a whole functions.

The Dragon Orb (The Alaris Chronicles Book 1) by Mike Shelton

The fate of a kingdom rests on the shoulders of three young wizards who couldn’t be more different. As the magical barrier protecting the kingdom of Alaris from dangerous outsiders begins to fail, and a fomenting rebellion threatens to divide the country in a civil war, the three wizards are thrust into the middle of a power struggle. When the barrier comes down, the truth comes out. Was everything they were taught about their kingdom based on a lie? Will they all choose to fight on the same side, or end up enemies in the battle over who should rule Alaris?

When Sky’s parents moved from San Francisco to Boulder City in Nevada, she thought her life was over, until she met the Hudson boys. Two years older than her, tattooed bad boy Nate was confident, cocky, good looking, and a straight talker. He was the unattainable guy that all the girls wanted, but the one their fathers warned them to steer clear of. Josh had all of his brother’s looks, but he was the sweet charmer your mother would beg you to marry. Their cousin Billy lacked the brothers’ good looks, so relied on his quick wit to attract the girls.

Sam Prichard doesn’t usually see ghosts, despite his mother-in-law and her hallucinatory friend, Beauregard. However, when a man is murdered right in front of him, Sam doesn’t forget a face, and when he sees that face again, and the life, in an extremely embarrassing situation, he can’t help but wonder what’s going on. How could the dead man and his doppelgänger be connected to Sam’s latest case, proving a client innocent of murdering his best friend? Some people think Sam has gone to the dogs over this one, because that’s exactly who he has to go to for help to solve not just one murder but two. It’s the wildest and craziest case Sam has ever been involved in, and the big question might be whether he will even survive.