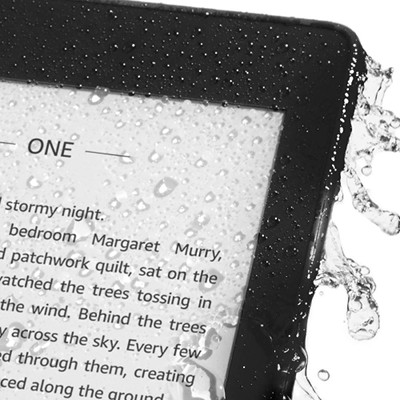 Ever since the new Kindle Paperwhite was released, there’s been some confusion about the screen. Some folks think it has a glass screen and other people say it has a plastic screen.

First off, let’s define what part of the screen we’re referring to, because some people probably aren’t talking about the same thing.

All Kindle ebook readers use E Ink screens that are laminated onto a glass backplane.

The glass is thin and it’s susceptible to cracking when twisted or impacted, which renders the screen unusable, unlike phones and tablets that you can still use with a cracked screen.

E Ink screens can also use a plastic-based backplane—these are called Mobius screens—and they are a lot lighter and more durable, but they are currently a lot more expensive than glass-based screens for some reason. Larger 10.3-inch and 13.3-inch ereaders use these screens since the larger glass screens are more likely to crack.

The 8-inch Kobo Forma uses a Mobius screen as well, and it came out right before the Kindle Paperwhite was released, so some folks thought maybe the new Paperwhite had a plastic-based backplane too.

But the Kindle Paperwhite 4 most certainly does not use a flexible Mobius screen. If it did it would be much lighter (it’s still heavier than most other 6-inch ebook readers) and it would be a lot more durable, which Amazon wouldn’t leave unmentioned.

However, when it comes to the front of the screen material, that’s a different story.

I naturally assumed the front layer was glass because all the other flush-front Kindles have had glass screens. Plus it looks like glass and it feels like glass. But I’m not 100% sure it is glass.

The front of the Paperwhite’s screen does have a slightly different feel to it than the Kindle Oasis and Kindle Voyage’s screens, and Amazon specifically states those screens are glass on their respective product pages.

But on the product page for the new Kindle Paperwhite, the word glass does not appear anywhere.

I’ve also noticed that the Paperwhite’s screen isn’t as cold to the touch as the screen on the Oasis and Voyage, which is one way to tell plastic from glass (a scratch test is another way to tell but I’m not going to try that!).

Initially I was certain the front of the new Kindle’s screen was glass, but now I’m not so sure. It’s not as cold as other Kindles with glass front screens, and reflections are slightly more apparent.

What do you think? Is Amazon using some kind of plastic-based front layer on the Kindle Paperwhite’s screen, or is it glass?