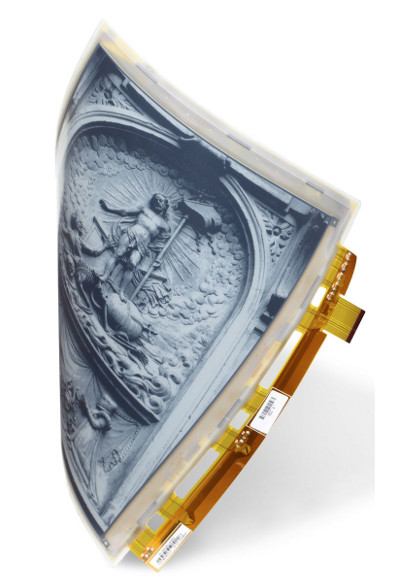 E Ink has announced that they have co-developed a new large format epaper display technology with Sony called Mobius that is going to start being mass producing later this year.

Mobius displays measure in at 13.3 inches, and have a resolution of 1200×1600. The size is meant to correspond with a typical A4 size sheet of paper.

What’s interesting about Mobius is that it will be the first large-screen epaper display technology to go into mass production—and it’s flexible.

The screens are flexible because they use a plastic-based substrate instead of glass. This makes them much more durable and lighter than screens used on current E Ink ebook readers. By comparison Mobius displays weigh less than half as much as an equivalent glass-based display. E Ink states that a 13.3″ Mobius panel only weighs about 60 grams.

The flexible TFT screen technology was developed by Sony specifically for epaper displays. And Sony just unveiled a prototype of a device using a Mobius display that is going to be tested later in 2013 at three universities in Japan.

Sony’s Mobius prototype is thus far nameless, but the specs look interesting. It features an electromagnetic stylus for notes and highlights, it has a microSD card slot, 4GB of internal storage space, Wi-Fi, and a 3 week battery life. The device measures a slim 6.8 mm thick and weighs just 385 grams (13.6 ounces). The 1200×1600 resolution isn’t great, but it should be adequate for larger text. The device is designed specifically to be a PDF reader, as that is the only format that it supports.

Hopefully Mobius displays should bring about a competent electronic paper ereader for PDF reading in the near future. There certainly seems to be a big enough market for it.