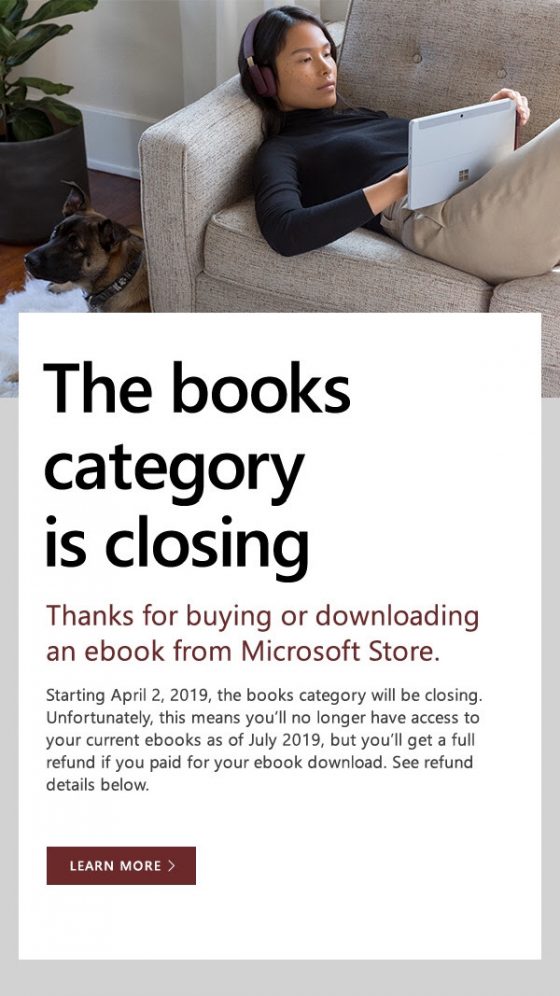 Today Microsoft announced that they will be closing their ebook store for good as of April 2nd, 2019.

Considering how unpopular it was that’s not surprising, but what is surprising is the fact that they’ve decided to delete all ebooks from user accounts and issue refunds for past purchases and pre-orders.

It sounds like another fake April Fools’ story but sadly it’s not.

Microsoft has decided that they want out of the ebook business so bad that they’re going to remove everything from their servers and refund all past ebook purchases.

That’s probably not as bad as it sounds considering most people didn’t even know that Microsoft sold ebooks.

But for anyone that has gotten ebooks from the Microsoft Store, both free and paid, they will be getting deleted from user accounts in July 2019.

Microsoft will be offering full refunds for these disappearing books so it’s not as bad as it sounds, but it’s certainly an unprofessional way to conduct business and yet another bad look for Microsoft.

According to this Books in Microsoft Store: FAQ, refunds will start rolling out in early July. They will automatically refund ebook purchases to the original payment method, and if that’s no longer valid they will issue a store credit for the Microsoft Store.

Microsoft will also be offering an additional $25 credit to people that had any annotations added to their purchased ebooks for the inconvenience of losing their notes.

It’s been proven yet again that companies can’t just put out a half-assed ebook store with yet another ridiculous DRM scheme that severely limits how people can read their purchased ebooks and expect to rake in money. Even giants like Microsoft can’t pull that off.