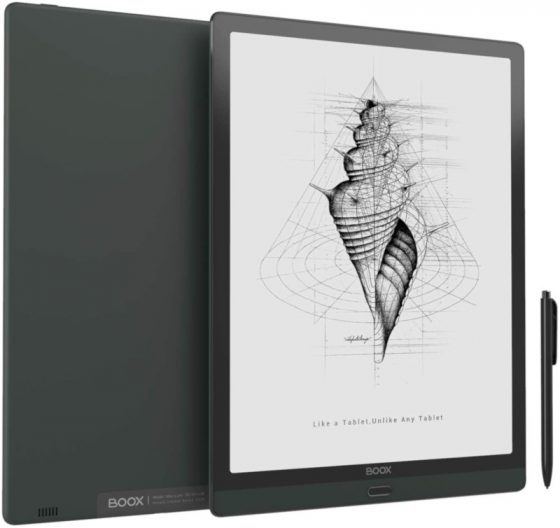 That was fast. Onyx released their first 13.3-inch ereader with a frontlight earlier this week, and now it’s already available to purchase from Amazon.

Onyx said there would be a delay before the Boox Max Lumi would be available from their Amazon store, but it ended up only taking a few days. However, the listing says the Max Lumi won’t be in stock until September 30th, but that’s less than a week away.

The price of the Max Lumi is $879 with free shipping. You can get it for $20 less from Onyx’s website until September 28th with their early bird offer, but shipping from China probably costs more.

Onyx has released several generations of “Max” models over the past four years, but the Max Lumi is the first one with a frontlight. In fact it’s the first 13.3-inch ereader to feature a frontlight.

I still can’t believe Onyx went through 108 prototypes in nine months to get the frontlight uniformity right, but that’s what it says on this page. That’s a new prototype every 2.5 days for nine months!

Like Onyx’s other devices, the frontlight has warm and cool color temperatures that can be blended to your liking, with 32 levels of brightness settings.

The Max Lumi also features an upgraded octa-core processor that is supposedly 30% more responsive than the processor on the previous Max3, and they’ve upgraded to faster LPDDR4X RAM. It has 4GB of RAM and 64GB of storage space.

Other hardware features include USB-C with support for OTG to connect things like hard drives or keyboards. It also has Bluetooth and supports dual band WiFi, and it has an HDMI port to connect the device to a computer to use it as an E Ink monitor.

Onyx added some new software features as well, including the ability to use two apps at once in split screen view, and they upgraded the operating system from Android 9 to Android 10.

I won’t be reviewing the Max Lumi but here’s my Max3 review from last year if you want to see how it works since 95% of the functionality is still the same.