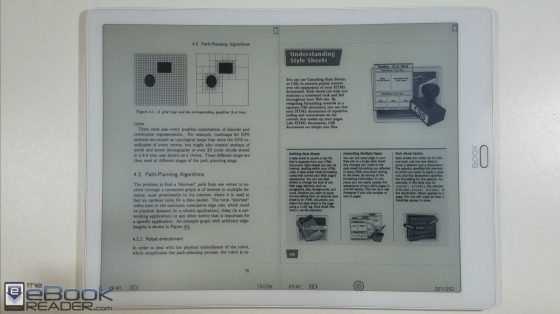 Released in September 2019, the Onyx Boox Max3 is Onyx’s latest new device that serves multiple functions: it can be used as an ereader, a digital notepad, and as a secondary E Ink monitor, among other things if you’re creative enough.

Like the previous Onyx Max models, the Max3 has a 13.3-inch E Ink screen. It uses the same screen as the Max2 but with a completely new design.

They upgraded some of the other hardware components, however, and the software has been updated to Android 9.0 as well.

The Max3 is something like the 5th Max model, but it’s the third generation overall.

It’s basically a larger version of the 10.3-inch Onyx Note Pro and 7.8-inch Nova Pro models released earlier in the year. It adds some additional features and some upgraded hardware, but most of the software features are the same and the overall design is very similar.

Overall the Onyx Max3 is a very nice device. The new design is a big step up from the Max2 and the hardware upgrades were needed to help set the Max above Onyx’s other models.

But for me it’s hard to get past the high price, especially when you can get the Note Pro for over $300 less with 90% of the same features and a frontlight. But I suppose it you’re using this kind of device everyday for business or education it’s worth the expense.

Aside from the price, the lack of a frontlight is the biggest thing going against the Max3, but the larger screen does have some advantages, and the monitor mode feature is something most other devices don’t offer. As far as 13.3-inch ereaders go, there aren’t many options. The Sony DPT-RP1 is the only alternative, and its software is a lot more basic.

The new design is somewhat reminiscent of the white Sony DPT-RP1, which is a huge improvement because the Max2 was a tank. The new design is more elegant, and while the device is still huge with the 13.3-inch screen, it’s smaller and easier to handle.

They include a thicker white stylus with the Max3 instead of the black stylus that comes with other models. The white stylus has a nicer feel but it does lack the side button to trigger the eraser with the tip, but you can still erase with the opposite end.

The Max3 has a flush front screen with a PMMA-based layer so along with the 13.3-inch Mobius Carta screen from E Ink there is no glass. In fact you can see the screen flex slightly when pressing down.

The plastic layer adds a slight texture so writing with the stylus feels a bit more natural than writing on glass.

A screen protector is included in the box, but I hate screen protectors so I never installed it and the screen still looks perfect, but it’s only been two weeks. An $860 device that’s meant to be written on should have a screen that’s durable enough to stand up to the task, as far as I’m concerned.

The addition of USB OTG support is a big plus, especially since Onyx includes a USB-C to microSD adapter in the box, so you can easily connect a microSD card.

One of the changes with the Onyx Max3 is they updated the software to Android 9.0, but Onyx has their own heavily-customized interface so the Android version makes little if any usable difference.

There are a few nice changes from the Android 6.0 software on previous models. They updated the user interface in a couple of areas, they improved sidenotes and made them accessible from the Note app, they added the option to view two documents at once in landscape mode, there’s a new quick settings menu with some additional refresh modes and a global contrast adjuster, but all the core features and interface layout is the same before.

Some of the aspects of the user interface remain as annoying as ever. The ebook and note apps still don’t appear on the recent apps list. One thing that drives me crazy is the “S” in “settings” is partially cutoff on the homescreen. But as a whole the software is quite good and is a lot more capable than other devices.

I’ve reviewed two other Onyx ereaders in the past few months and since the reading software and note app is mostly the same on the Max3 it would just be repeating the same things over again.

See the Onyx Note Pro review for a list of features regarding Onyx’s reading and note-taking apps.