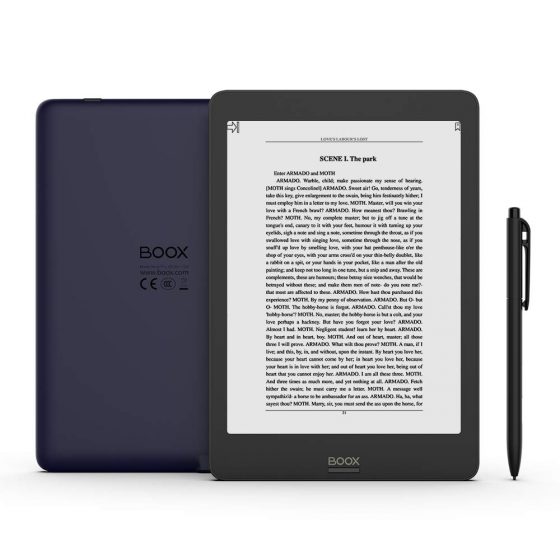 The Onyx Boox Nova Pro is a follow-up to the regular Onyx Boox Nova that was released a few months earlier (except they only released it in limited markets for some reason, and they still don’t sell it from their Amazon store). The only difference with the Pro version is it adds a Wacom touchscreen and comes with a stylus for notes and drawings but everything else is the same.

The Nova is basically a smaller version of the 10.3-inch Onyx Boox Note that was first released last year.

Aside from the screen difference the specs are largely the same.

With a smaller 7.8-inch screen the Nova is a more portable and less expensive version of the Note, and it has all the same capabilities as its larger sibling.

Onyx has also recently released a newer version of the 10.3-inch Note called the Onyx Boox Note Pro. It adds a frontlight like the Nova and it has double the storage space and RAM. I’ll post a review of it soon, along with a comparison with the Nova Pro.

The Onyx Boox Nova Pro has a 7.8-inch E Ink Carta screen with 300 ppi. It also has a frontlight with cool and warm color temperatures.

It has a flush glass screen that looks nice and gives it a solid, sturdy feel. The only downside with glass screens is they degrade contrast somewhat. It’s not a big difference but the text on the Likebook Muses has a slightly clearer and darker quality to it without the glass layer.

On the plus the frontlight looks really nice and it has a wide range of brightness settings with very low levels for reading at night. Previous Onyx ereaders were too bright for me at the lowest setting but that’s not an issue on the Nova Pro, and I like being able to mix the two light colors to get a softer look without it being too orange.

The Nova Pro has a USB-C port on the bottom edge and a power button on the top right corner. There’s a back button below the screen, and if you hold it down you can turn the frontlight on and off.

The material on the back of the Nova is plastic, and it makes light creaking noises when handled. Onyx’s devices always seem to do that where the plastic rubs on something; it’s their signature. It’s not a big deal but I never notice a Kindle or Kobo creaking when I pick it up.

The battery seems to drain faster than I’m used to with the Onyx Boox Note, but it’s the original version without a frontlight. Battery life never seems quite as good with Android ereaders in general, and the Nova Pro is no exception. You can easily drain 50% of the battery with two days of heavy usage.

The Nova Pro supports audio files and text-to-speech but you have to use Bluetooth speakers or headphones because there aren’t any external speakers.

Initially I had problems with the touchscreen not always responding to touches, as noted in the Likebook Muses vs Onyx Nova Pro comparison review, but after updating to the newer 2.1 software that problem has virtually disappeared.

The Nova Pro runs Android 6.0.1 and is open to install apps. It comes with a few apps pre-installed, including a basic appstore with a few reading apps and some other apps for easy access. You can also enable the Google Play store from settings, which requires a couple of extra steps to setup.

Here’s an article with a video that shows how to Activate Google Play on Onyx’s ereaders.

Just keep in mind that 99% of Android apps aren’t designed to work with E Ink screens so it’s common to encounter problems with the screen not refreshing properly and some things being hard to read.

I tried the Kindle app and it works well enough to be usable but if you primarily want to read Kindle ebooks you’re better off just getting a Kindle.

The Note app on the Nova Pro is the same app as it is on the larger Note and Max models. Onyx’s Note app works quite well and they’ve added some new features to it, like the ability to convert handwritten notes to typed text.

The conversion feature is pretty cool but it still needs some work. It doesn’t recognize line breaks so everything gets jumbled together in one big block of text, and sometimes word spacing isn’t correct.

The Wacom touchscreen works well—writing is fast and accurate. With the glass it has a slicker feel than writing on paper but you get used to it after awhile and you don’t have to worry about the glass scratching. Having used the 10.3-inch Note for the past year it does feel a bit cramped writing on the smaller 7.8-inch screen, but it has the advantage of being more easily portable.

Again, 3rd party note apps like OneNote are unlikely to work very well because they aren’t designed to work with E Ink screens and have too much lag when writing.

Onyx’s built-in Neo Reader app is actually quite good, much better than the default app on other Android ereaders. It supports a number of formats and offers a wide range of features. They just updated it to version 3.0, which has a new look and some new features, including the option to view two pages at once in landscape mode.

Onyx’s software is especially good with PDFs and you can write directly on PDFs using the Wacom stylus. See this separate Nova Pro PDF review for more details.

The only thing I don’t like about the Neo Reader app is the font choices are poor. Most of the fonts look exactly the same despite having different names, and it’s like they just threw a bunch of random fonts together with no regard for E Ink optimization. Some are labeled serif that are clearly sans-serif and vice-versa. But at least you can easy sideload additional fonts by placing a “fonts” folder on the root directory.

One interesting observation, Onyx seems to have dropped Adobe DRM support. They used to have the option to add your Adobe ID in settings but that option no longer exists.

Overall the Onyx Boox Nova Pro is a nice ereader and digital notepad. Onyx’s ebook app has a lot going for it and the note app works quite well, and being able to sync notes to Dropbox makes accessing them on other devices easy.

There are some software quirks and battery life isn’t great, but that’s just kind of the nature of Android ereaders. With the quad-core CPU and updated software performance is a lot smoother than it used to be, and the Android OS opens up more options than you get with a typical ebook reader, and I like Onyx’s new frontlight system with the adjustable color temperature.

I do wish the price was a little lower, though. The Kobo Aura One was the first 7.8-inch ereader and it sold for $229, and there’s also the Likebook Mars that sells for $239. It’s a lot like the Nova Pro minus the Wacom touchscreen, and it also adds a memory card slot. If you don’t need the Wacom stylus the $319 price for the Nova Pro is pretty steep, but it’s still a lot cheaper than Onyx’s larger models and you get the same note-taking and software features on a smaller scale.