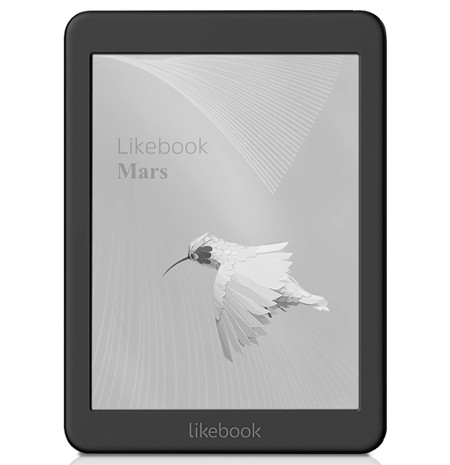 The Likebook Mars is made by a company called Boyue that’s based in China.

Boyue has been making ereaders for several years now, sometimes under different brand names (like InkBook), but the Likebook Mars is their first to run Android 6.0 (the other models have software based on Android 4.2 and 4.4) and it’s also the first ereader to come with an octa-core processor.

It has a recessed 7.8-inch E Ink screen with 300 ppi, and it has a dual color frontlight with warm and cool light tones. However, the colors can’t be blended like with Kobo ereaders; instead you can only switch between cool and warm.

Apparently it comes with the Google Play store pre-installed now. At first it didn’t so I was using APKPure to download apps.

Personally I don’t like the default Boyue reading app at all. It butchers the layout of ebooks and uses its own wonky formatting with a bunch of spacing issues.

Luckily other apps can be installed. I like KOReader a lot better than the default app, and it was designed for E Ink devices so it works quite well. One nice thing about Boyue’s software is you can set a default app to open books from the homescreen and library view so you don’t have to use the built-in app if you don’t want to, and the library view is nicer than KOReader’s.

The Likebook Mars also has Bluetooth for connecting things like keyboards and speakers, along with a headphone jack. If doesn’t have text-to-speech like Onyx’s ereaders, however.

It doesn’t come with very many apps pre-installed, just some core apps like a music player, an image viewer, and a basic file manager. It does include a web browser that works pretty well considering the E Ink screen, much better than the Kindle’s awful web browser.

The Likebook Mars has a rather basic design somewhat similar to the Kindle Paperwhite. It doesn’t have any page buttons and the lack of a hardware back button isn’t ideal with Android (sometimes you get stuck in an app without the menu bar and the only way to get out is to reboot). It doesn’t have a flush front screen, and it’s not as thin and light as the Kobo Aura One, and it also lacks waterproofing and a premium feel.

Given that, the price seems a bit on the high side, but you’re paying for that octa-core CPU and open Android experience.

If you just want to read Kindle or Kobo books, you’re better off getting one of those devices (in fact you could buy both a Kindle Paperwhite and Kobo Aura 2 for less than the Likebook Mars). But if you’re the kind of person that wants some extra features and customizable options and don’t mind loading in other reading apps the Likebook Mars is a solid option. In fact it’s one of the best Android ereaders to get released thus far.

Personally I like Onyx’s software better, especially when it comes to reading PDFs, so stay tuned for my review of the 7.8-inch Onyx Boox Nova when it gets released soon. It’ll be interesting to see how the two compare.