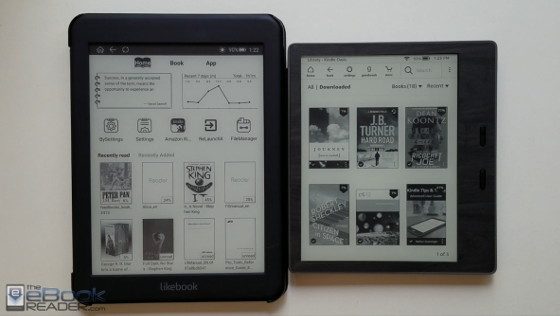 The Likebook Mars is a new 7.8-inch ebook reader that runs Android 6.0, and it’s the first E Ink device to come with an octa-core processor.

I thought it would be interesting to compare it to the 7-inch Kindle Oasis 2 with a dual-core processor, where the performance increase is so minimal over the other Kindles with single-core processors that Amazon doesn’t even bother to mention it.

Does an octa-core processor really matter when it comes to reading ebooks?

No, not really. The Kindle Oasis is faster and more responsive than the Likebook Mars in most respects.

The Likebook has some advantages of its own aside from the processor, including a microSD card slot, a headphone jack, and a dual-color frontlight (warm and cool). It can also install apps, including the Kindle app, which runs pretty well (but it’s slower than the Kindle Oasis and the fonts aren’t optimized for E Ink).

The fact that the Kindle Oasis is just as fast if not faster in most respects, it’s pretty obvious that having more cores doesn’t really matter when it comes to ereading. But it does have some advantages in other ways.

The Likebook Mars is much faster than other Android ereaders with single and dual-core processors, but the performance difference with quad-core devices like Onyx’s newer ereaders is minimal.

Having a processor with 20 cores still isn’t going to solve the age old problem of Android apps not being designed to run on E Ink screens. There’s still lots of ghosting and problems with images and menus not displaying properly. The Likebook suffers from this more than the Onyx Boox Note, for instance, because Likebook’s software doesn’t refresh as often as it should with 3rd party apps.

The Kindle may have a slower processor but it proves that having software that is optimized for E Ink screens is better than having a faster processor with more cores.

Both devices sell for about the same price. The Likebook Mars sells between $239 and $269 at Amazon (the price fluctuates, and it does include a cover) and the Kindle Oasis starts at $249 and goes up to $349 for the 32GB model with free cellular wireless.