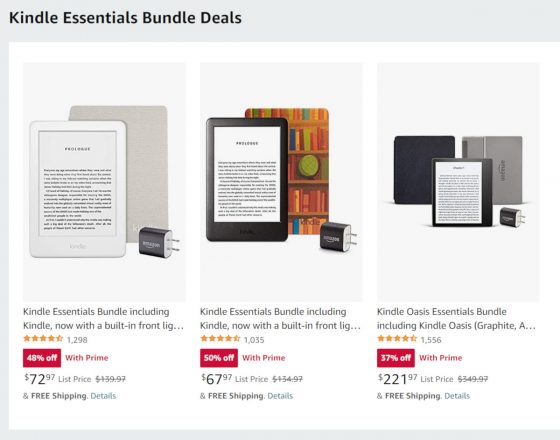 Amazon has added some more early Prime Day deals on Kindle bundles to go along with the $49 Kids Kindle deal from yesterday.

Included in these new deals are the “Essentials” bundles for the entry-level Kindle and the Kindle Oasis; the Kindle Paperwhite bundles are still regular price so apparently they’re holding out for later on those.

The “Essentials Bundle” adds a cover and a USB wall charger to an ad-supported Kindle (you can still unsubscribe from ads later if you want to). There are two different bundle packages for the entry-level Kindle, one that comes with Amazon’s fabric Kindle cover and one that comes with Amazon’s Printed Cover. The Oasis has different cover choices as well but everything is located on the same page.

Prime members can get a Kindle Oasis Essentials bundle for $195. It’s like getting $55 off the Kindle Oasis and a free cover and a free wall charger compared to regular list price so that’s actually a pretty good deal.

However, the entry-level Kindle bundle starts at $67.97, and that’s really not a very good deal unless you especially like the cover design. A Kids Kindle for $49 is a much better deal, especially since the kids version doesn’t have ads and is the exact same Kindle otherwise.

Kindle Essentials Bundle with Fabric Cover – This bundle is selling for $72.97 with Prime and it includes an ad-supported entry-level Kindle with Amazon’s fabric cover (available in four colors) and USB wall charger. The regular price is $124.97, and the covers sell for $29.99 individually.

See here for more info about the $49 Kids Kindle deal from yesterday.