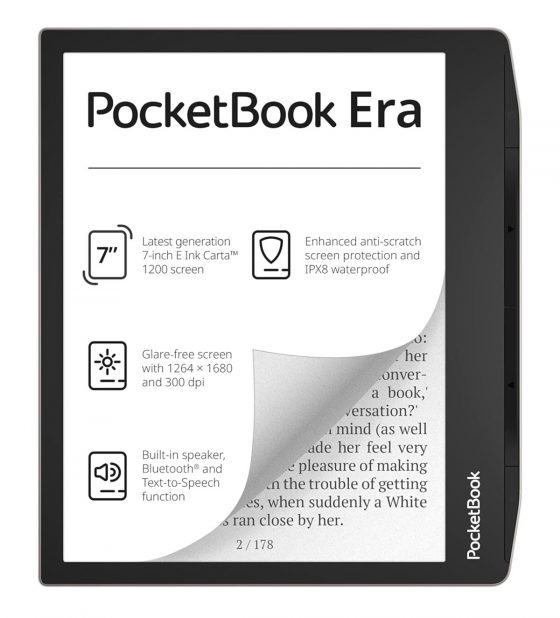 Now they’ve started taking orders for the PocketBook Era on Amazon. The 16GB model in Stardust Silver is selling for $199 and the 64GB model in Sunset Copper is $249. Shipping is currently a ways off but that will probably change, as Amazon’s shipping dates are notoriously pessimistic when it comes to new items.

The PocketBook Era has a 7-inch E Ink Carta 1200 screen that PocketBook claims has a 15% increase in image contrast and a 20% boost in touchscreen response time. It also has a frontlight with adjustable color temperature, as you’d expect from a device at this price.

The PocketBook Era is waterproof (it’s IPX8 rated) and it has WiFi and Bluetooth for connectivity, along with a USB-C port. There’s a rotation sensor that automatically switches the screen orientation, and it has text-to-speech and supports audio files using a built-in speaker and Bluetooth for streaming.

It’s hard to tell from the pictures but it has page buttons along the side with the handle. They also have a case for it (not available yet) that attaches magnetically, similar to the Kindle Oasis 2 before Amazon mysteriously abandoned the idea and removed all the magnetic covers from their store.

All in all it looks like a really nice ereader and it’s good to see the price is reasonable. PocketBook’s software supports a number of formats, including ePubs with Adobe DRM. The PocketBook brand isn’t very well known in the US but they’ve been around for a long time and they’re a good alternative to Kindles and Kobos.