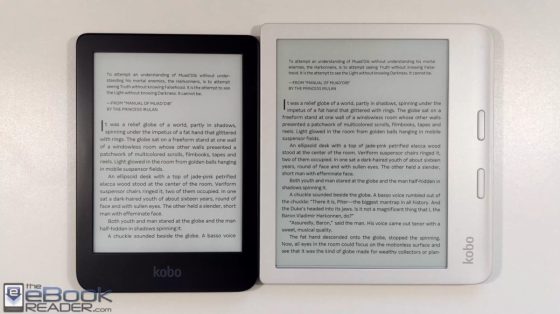 Now that the Kobo Clara 2E has been released, I thought it would be helpful to post a comparison review between it and the Kobo Libra 2 for those that are trying to decide between the two.

The differences mostly come down to the design and screen size. The software on both units is the same, except for the fact that the Clara 2E is mysteriously missing three font types: Gill Sans, Malabar, and Caecilia; and the Libra 2 offers landscape mode, while the Clara does not.

Both devices have 1GHz processors so overall performance is virtually identical as well. There are a couple of minor hardware differences (noted below), and the screen background appears to be lighter on the Clara 2E, but that’s probably just an optical illusion with the white border on the Libra 2—it’s hard to tell, but both devices have E Ink Carta 1200 screens with 300 ppi so they should look the same.

Basically it comes down to a smaller device that’s more portable versus a larger device with page buttons. Both are waterproof, both have USB-C ports, both have frontlights with adjustable color temperature, and both offer the same general reading experience.

See my Kobo Clara 2E review and Kobo Libra 2 review for more details about each model.

The Kobo Libra 2 has a rotation sensor to switch hands and to use landscape mode; the Clara does not support rotating or landscape mode.