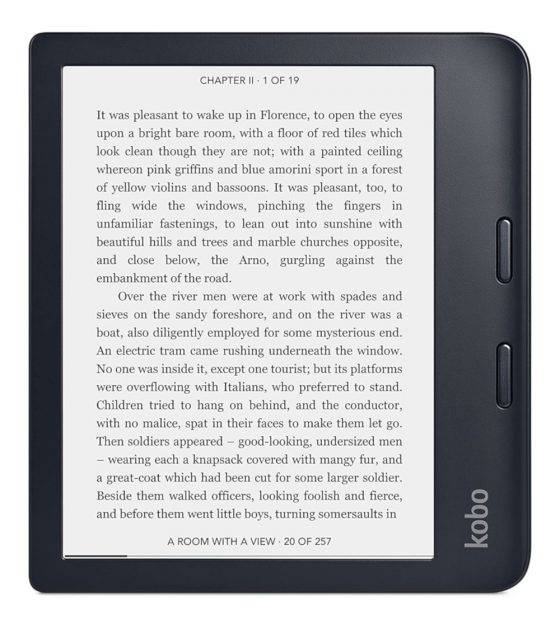 The Kobo Libra 2 was released on October 19th, 2021. It’s an updated version of the Libra H2O that was originally released in 2019. The new model adds some hardware upgrades and a slightly tweaked design, and it also adds support for Kobo’s audiobooks.

The Kobo Libra 2 has a 7-inch E Ink screen and sits between the 6-inch Kobo Clara HD and 8-inch Kobo Sage in Kobo’s lineup. There’s also a 10.3-inch model called the Kobo Elipsa.

The Kobo Sage was released at the same time as the Libra 2. In addition to the larger screen, it adds support for Kobo’s stylus for writing notes and marking up PDFs and ebooks. It also has a faster processor like the Elipsa.

The Kobo Libra 2 comes in both white and black, and it sells for $179 USD from Walmart and Amazon.

I’ve been pleasantly surprised with the Kobo Libra 2. I didn’t have high expectations based on my experience with the first generation model, but it’s quickly becoming one of my favorite ereaders.

The only complaint I have about the Libra 2 is it’s a bit on the heavy side and it’s kind of thick, and the plastic casing doesn’t feel as elegant in the hand as similar models like the Kobo Sage and Kindle Oasis, but it’s also a lot cheaper than those devices.

Most importantly, the screen looks great and the frontlight is the best I’ve seen on a Kobo ereader. If screen contrast and frontlight uniformity means a lot to you, and you don’t care about the upgrades on the Kobo Sage, then the Kobo Libra 2 is the model to get.

On paper it doesn’t look like much has changed on the Libra 2 compared to the first gen Libra H2O model. The new version adds 32GB of storage space, Bluetooth to listen to audiobooks, and a USB-C port, but most of the other specs remain the same as before.

The Kobo Libra still has a 7-inch 300ppi E Ink screen, a frontlight with adjustable color temperature, a 1GHz processor, WiFi (still single band only), and an IPX8 rating, meaning it’s waterproof down to 2 meters for 60 minutes. 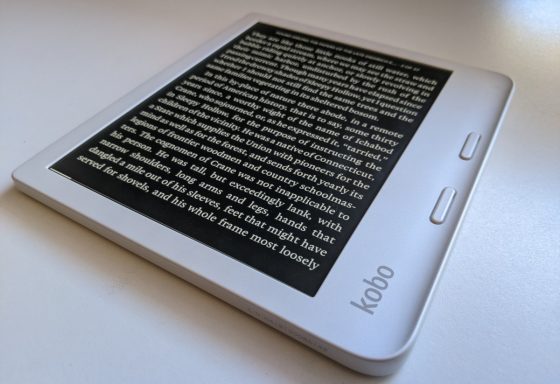 For some reason it’s actually a bit heavier than the first gen Libra by about 20 grams, but it’s still comfortable to hold with a thumb resting over a button. They did change the design slightly by adding more of a flair to the edge and moving the buttons closer to it. It does help make the device feel nice and secure in your hand, and the back has some texture for added grip.

The plastic casing doesn’t feel as nice as the soft rubbery texture on the Kobo Sage, and it doesn’t have the premium feel like the Kindle Oasis. It has more of a utilitarian design, and it has an indented screen instead of a flush screen, which some people consider a downgrade, but it actually helps make the screen look better without having an extra layer over the front.

The Kobo Libra 2 uses a new Carta 1200 screen with improved contrast. It’s not a huge difference but it’s definitely noticeable. When I reviewed the Kobo Elipsa earlier this year the difference was less noticeable because it has an extra front layer with added texture for writing that degrades the clarity of the E Ink screen slightly.

The contrast improvement is more noticeable on the Libra 2 with the indented screen. Blacks are darker and it helps make the text stand out more. For whatever reason it still can’t quite match the clarity and contrast of the screen on the Kindle Voyage from 2014, but they’re getting close. 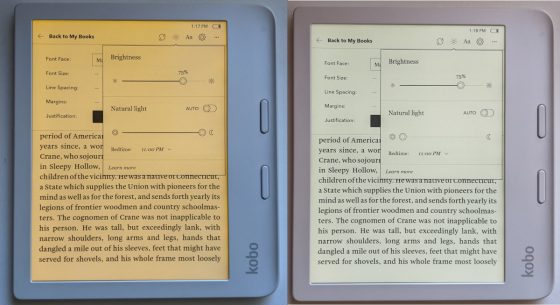 Frontlights can vary from one device to the next so it’s hard to make any kind of definitive statement, but the frontlight on my Kobo Libra 2 is the best frontlight I’ve seen on a Kobo ereader. It has no obvious bright spots or shadow cones, and no gradient. Both the warm and cool colors are very evenly-lit, and the frontlight helps make the text stand out.

Considering the first get Libra model had one of the worst frontlights I’d ever seen, I was pleasantly surprised by such a drastic improvement.

I really like how the frontlight makes the background color blend in with the white casing on the Libra 2. It gives it a clean look and helps make the text pop off the screen.

For the most part the software on the Kobo Libra remains the same as before. Kobo did officially add Dark Mode for white text on a black background, so that will be a welcome change for some. 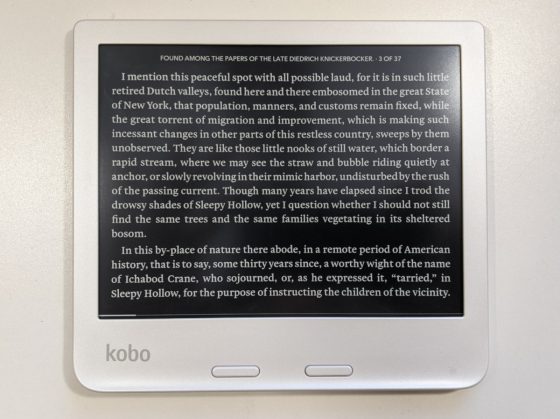 The second thing they added is an audiobook player, but it seems to only work with audiobooks purchased from Kobo, and unfortunately there doesn’t appear to be any way to borrow audiobooks from OverDrive or sideload audiobooks.

To use the audiobook player, you need to connect Bluetooth headphones or speakers because the Libra 2 doesn’t have speakers. The audiobook player has nine speed settings from .75 to 2.75, along with an estimated reading timer like with Kobo’s ebooks, and you can navigate chapters from a TOC list.

With the exception of the notebook app and Dropbox support on the Kobo Elipsa and Kobo Sage, all of Kobo’s ereaders basically run the same software and offer the same features. See the Kobo Software Features Page for a full list of Kobo’s software features.