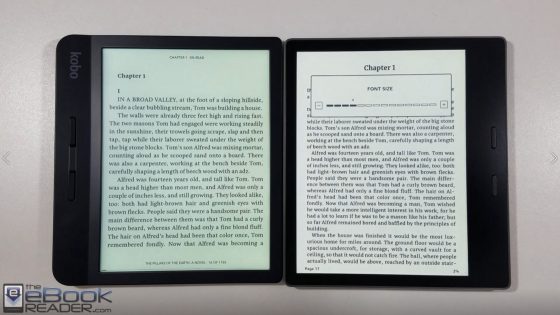 When Kobo first announced the new Kobo Libra, I thought it could be a threat to the Kindle Oasis considering the $80 price difference, but ultimately the price difference makes sense.

Starting at $249, the Kindle Oasis is a premium ereader and it feels and looks like one.

At $169, the Kobo Libra is more of a mid-level device with a plastic housing, indented screen, and a clearly inferior frontlight.

On the surface both share a lot of the same features.

Both have the same 7-inch 300 ppi E Ink screen and a shamelessly similar design.

Both are waterproof and both come with 8GB of storage space, although the Oasis has the option for 32GB. The Kindle Oasis also has the option to add cellular connectivity, albeit at a ridiculously high price of $350.

The Kindle adds some additional features, like Bluetooth support for listening to Audible audiobooks and using a screen reader for text-to-speech. There’s also a vocabulary builder and more learning tools, plus notes and highlights can easily be exported.

Kobo has some unique features as well, like having OverDrive support built-in for library ebooks, and Pocket for web articles. Kobo’s are also more opening to installing customized patches and software tweaks.

Frontlights can vary from one to the next so it’s hard to tell what you’re going to get. But at this point I’ve consistently seen more flawed frontlights on Kobos than Kindles so I’m no longer giving Kobo the benefit of the doubt. If you want a superior frontlight, get a Kindle. The video evidence leaves no doubt.

The Kobo Libra is fine device otherwise, and the lower price and support for ePub are some of its main advantages, but ultimately it falls short against the Kindle Oasis, and that’s okay. The Kobo Forma is Kobo’s premium device anyway, not the Libra. Having the same screen and a very similar design as the Oasis is naturally going to draw some comparisons, but they are not on the same level.