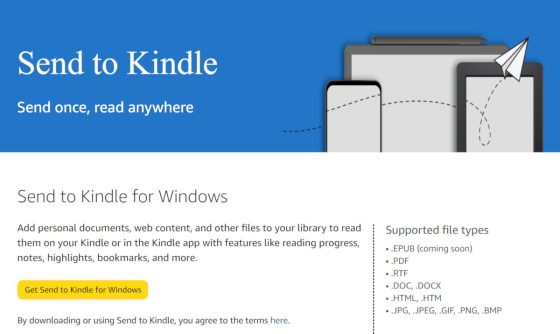 Amazon has finally updated their Send to Kindle apps for Windows and Mac computers to add support for sending EPUB files to Kindle ereaders and Kindle reading apps.

They don’t actually send the EPUB file to Kindles, but it gets converted to Kindle format in the process, and they only support DRM-free EPUBs, of course.

Amazon added support for emailing EPUBs back in April, and their iOS and Android Kindle apps have supported sending EPUBs since August, and now finally the PC and Mac apps support sending EPUBs as well.

Amazon recently added a Send to Kindle webpage to their website that can also be used to upload EPUBs to Kindles, among other supported formats, including PDF, DOC, DOCX, TXT, RTF, HTM, HTML, PNG, GIF, JPG, JPEG, and BMP.

The webpage supports a maximum file size of 200 MB, but oddly enough the updated version of Send to Kindle for PC still has a limit of just 50 MB per document.

They’ve been saying on the website that the Send to Kindle apps would get updated in “late 2022” and they weren’t kidding. With less than two weeks left in 2022 they finally got the updated 1.1 versions posted. The website still say EPUB support is “coming soon” but I tested the new version of the Windows app and sending EPUBs works.

They were supposed to end support for sending MOBI files using Send to Kindle, but apparently those still work too, at least for the time being.

You can download the updated version of the Send to Kindle app for Windows and Mac from Amazon’s website.