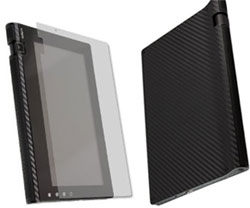 Skinomi is the first company to offer screen protectors for the Notion Ink Adam and they were nice enough to send a free sample to test for this review. I imagine the install process and overall review will apply to most other tablets Skinomi makes skins and screen protectors for as well. I received the […]

Everyone in tablet-land is waiting for a new device that can take on the iPad, something that supports Adobe Flash and isn’t hampered by Apple’s proprietary closed-in software. One of the main contenders for this onerous task, according to main-stream-media, is Notion Ink, a startup company based in India. Notion Ink’s device is called the […]