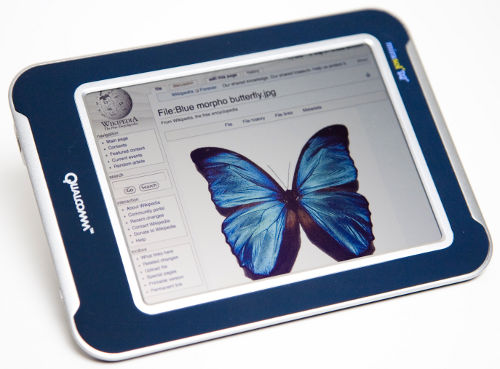 According to an article at DigiTimes, Qualcomm has found a major client for their 5.7″ color displays. So major that they are willing to invest $2 billion to build a new production plant in Taiwan.

So the big question is who is the major client? Given the fact that the article says this, the displays will most certainly be for ebook readers and not something like laptops:

Equipment installation is scheduled to begin in October 2011 and volume production at the beginning of 2012 mainly for 5.7-inch color applications.

So that most likely means that we’ll be seeing a color Kindle or color Sony Reader or perhaps even some other major company’s color ereader by 2012; who knows, the major client may even be a Chinese-based brand like Hanvon or Netronix, although Hanvon is already rumored to have a color E Ink device coming later this year.

Regardless of who the client is, a color Mirasol ereader is on the way, but likely not until 2012, unless Qualcomm’s existing production plant starts churning them out sooner.

Some benefits of Mirasol displays are they’re very energy efficient, are easily readable outdoors in bright light, can play video with refresh rates up to 30 fps, and are said to be less expensive than E Ink displays. Check out our dedicated Mirasol page for more details about how the IMOD technology works.

A Look at Qualcomm’s 5.7″ Mirasol Display