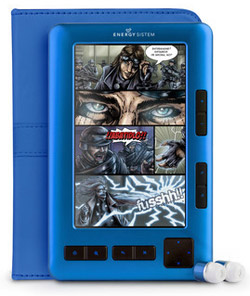 Energy Sistem, a small electronics company based in Spain, has some new color multi-purpose ebook readers, 2 of which are available now, and 2 more getting set to be released in November.

Aside from the color and difference in memory, the 4 units have the same set of features. Being multi-purpose ereaders, they’re not only for ebooks, they play videos, music, and display photos too. They have 5-inch TFT LCD displays with a pixel resolution of 800 x 480.

These ereaders have a 1800mAh rechargeable Lithium battery, but there isn’t any mention of battery life. I’d expect the battery to last anywhere from 5-7 hours for video playback, given the battery life of similar devices. 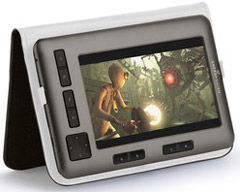 The Energy Sistem color ebook readers come with 1500 classic Spanish, English, Portuguese, and French ebooks. They also come with a case that props up the ereader for watching videos (shown right).