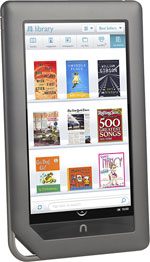 Now that Barnes and Noble has revealed their latest shiny new gadget, the Nook Color, it’s a good time to go over all of the official specs and make a list of the pros and cons of the device as an ebook reader and as a tablet.

If you look at the date of this article you see that it was published before the Nook’s release. On January 4th, 2011 I went ahead and updated this post after having used the Nook Color since its release in mid-November.

Make sure to check the new dedicated Nook Color Review page for my full hands-on review, video review, photos, and the complete list of specs.

The Nook Color is a multimedia device first and an ereader second. Given its feature-set it clearly isn’t designed for the person who is a hardcore reader like the original Nook was. It is designed more for casual readers that enjoy reading color content in the from of magazines, newspapers, etc., and want to be able to browse the web, send emails, and play video and music as well as read.

For those that read for several hours a day, an E Ink ereader is probably going to be a better choice with its high-contrast display that’s easier on the eyes and long battery life for weeks of reading. What it all comes down to is personal preference, of course. So which do you choose? An ereader? Or a tablet that doubles as an ereader?