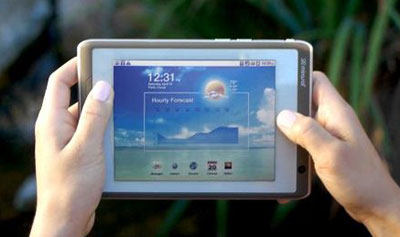 Mirasol is an alternative display technology that Qualcomm has been working to perfect for mass-production over the past few years to use for color ereader displays.

Mirasol displays are a lot like existing monochrome E Ink screens in that they use little to no energy when an image is on-screen and don’t use back-lighting so require external lighting for viewing—more light enhances the display quality instead of worsening it like with LCD.

Mirasol displays are capable of handling up to 30 frames per second, the benchmark for video play. The screen size is 5.7″ with a resolution of 1024 x 768.

Last year at CES a Mirasol prototype was on display and it was said that a Mirasol ereader would be on the market by the end of 2010. It was rumored that Amazon was the likely partner and that a color Kindle was on the way.

This year at CES Mirasol has a new version of their color ereader on display, again with hints of a Mirasol-powered ereader later this year. This time the rumored partner is PocketBook, but again there’s no “official” partnership or expected release date for a new device.

Signs are pointing to an imminent release of something, though.

On January 6th, Qualcomm announced the construction of a new fabrication facility in Longtan, Taiwan. The new facility is expected to produce small to medium-sized Mirasol displays. The company said that it will invest up to 975 million dollars in the initial phase of the facility, which is scheduled to be operational in 2012. And that isn’t the only facility capable of producing Mirasol displays.

But the question remains: Are Mirasol displays ready for the big show? This new device on display at CES looks a lot like the prototype shown last year, with a new chassis. Colors still have a washed out appearance, especially when ambient lighting isn’t bright, and everything has kind of a yellowish gold tinge, not to mention the occasional blip here and there when running videos.

I don’t know about you but I’m not quite sold on Mirasol displays just yet.