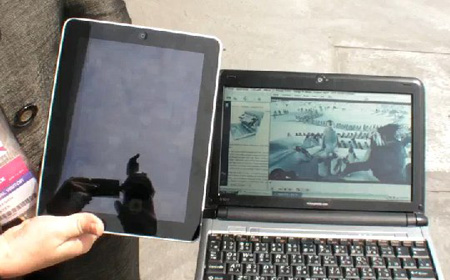 Pixel Qi is one of the new display technologies coming to ereaders, tablets, and other portable media devices in 2011.

Pixel Qi displays are similar to regular LCD displays like a computer’s screen but are more energy efficient because the backlight can be adjusted and turned off to save on power. In this mode ambient light is used to illuminate the display, making it readable in bright lighting environments.

At CES, Pixel Qi showed off new 7″ displays to go along with their 10.1″ displays that are currently available on a few notebooks and tablets, most notably the Notion Ink Adam. Pixel Qi is also working on a 9.7″ display like that of the iPad as well as a higher resolution 1280 x 800 10.1″ screen.

The 7″ displays are expected to be out in Spring of this year on a new device from an undisclosed company—most likely an Android tablet from a large company that we’ve all heard of. They have the same 1024 x 600 pixel resolution as the 10-inch screens.

This second video shows off the Pixel Qi displays on various devices and goes into some really good detail about how everything works.

At about 9 minutes in, Mary-Lou Jepsen reveals how this display technology opens up new avenues for innovation, like the potential for adding solar panels or eye tracking or making displays that use little to no battery power.