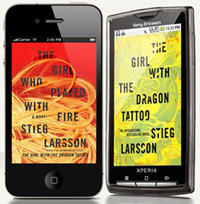 So the big news this morning is that Apple rejected Sony’s iPhone app because “Apple changed the way it enforces its rules”, according to Sony.

The problem with the Sony Reader app, according to reports, is that in has in-app buying without giving Apple their 30% cut, which is required for all in-app purchases. To workaround this, apps like the Kindle app launch the web browser to go to the Kindle store outside the app.

To complicate this matter, conspiracy theories are starting to arise that Apple wants to cut off other ereader apps like the Kindle and B&N apps.

This stems from a statement from this article on the New York Times: “The company has told some applications developers, including Sony, that they can no longer sell content, like e-books, within their apps, or let customers have access to purchases they have made outside the App Store.”

The last part of that sentence is what is causing the most concern, but is there any truth to it? Is Apple tired of losing iBook sales to other vendors? Publishers Weekly published an article recently reporting that more people buy ebooks from Amazon on the iPad than from Apple.

Perhaps with the upcoming launch of the iPad 2, Apple intends to take more of the ereading share. Perhaps the new iPad will offer a better e-reading experience than the original and Apple is getting prepared for that by cutting out the competition or by making them pay a percentage of sales.

Or maybe this whole situation has been overblown. Maybe Sony thought they could get away with breaking the rules. They don’t specify the exact reason the app was rejected.

Here’s what Sony posted on their mobile apps page. It doesn’t sound like they’ll be releasing an iPhone or iPad app anytime soon:

We would like to update everyone on the status of our Reader™ for iPhone® mobile application. We created an app that we’re very excited about, which includes all the features you’ve come to expect from a mobile reading application – including access to your existing collection, synching with your Reader Daily Edition™ and purchasing new content as is possible on other mobile platforms.

Unfortunately, with little notice, Apple changed the way it enforces its rules and this will prevent the current version of the Reader™ for iPhone® from being available in the app store. We opened a dialog with Apple to see if we can come up with an equitable resolution but reached an impasse at this time. We’re exploring other avenues to bring the Reader experience to Apple mobile devices. We know that many of you are eagerly awaiting the application and we appreciate your continued patience.