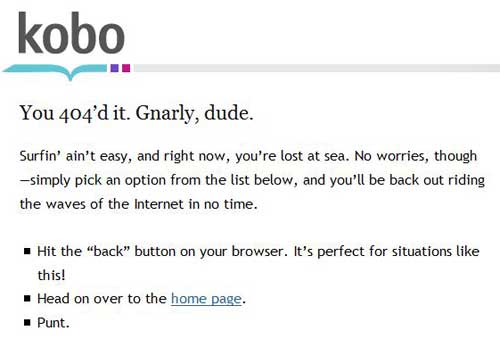 Last Saturday Kobo posted on their blog about having to change their reading apps for iPad and iPhone to remove the built-in reading store and any references to Kobo’s website because of new rules instituted by Apple regarding in-app purchases.

The blog post received hundreds of comments from people angry with Apple for making Kobo change the app, but now it is gone, the post has been deleted and is nowhere to be found.

Thanks to Paul for pointing it out:

I went back to the Kobo Blog pages which had been deluged with complaints about Apple removing the in-App store for both Kobo and Kindle, and it had disappeared – 404′d and page not found!! It was at http://blog.kobobooks.com/iosstore/
and I am left wondering what happened – did Apple’s Dirty Tricks Department blank it, or did Kobo want to stay on the good side (is there one?) of Apple and voluntarily take the hate tirade down?

Paul brings up some good questions: Why did it get removed? Did Apple make them remove it? Or did Kobo decide to delete it? Was it because some of the comments were getting out of hand? If that was the case why not just close the comments and leave the post as is?

Something is fishy. Either way you look at it.

I did some digging. I typed the url of the post into Google search and checked the cached version—bingo, the cached version was from the night of Wednesday the 27th, before the post was deleted. It had 457 comments and 15 trackbacks. Here’s the link to the cached version, but I don’t know how long it will last; once Google indexes the page again it will probably disappear.

Earlier today Apple in­sti­tuted new rules which af­fect your ex­per­i­ence on iPhone and iPad apps. The biggest change is the re­moval of the abil­ity to shop within our app.

Here’s what this means for Kobo users:

• Your books are safe! You can con­tinue to use the Kobo app to read them, ex­plore Read­ing Life, and enjoy all the other fun and en­ga­ging read­ing fea­tures from Kobo you’re fa­mil­iar with.

• With this change, iOS users wish­ing to ac­cess their Kobo ac­count, browse the Kobo Store, and pur­chase books will now need to go to Kobo.​com

• You can still browse Kobo’s se­lec­tion of 2.4 mil­lion eBooks, shop and ac­cess your ac­count! Go to Kobo.​com by dir­ectly open­ing and using their Sa­fari browser or using your fa­vour­ite web browser on your phone. Be sure to book­mark the store for fu­ture vis­its!

We value the opin­ion of our cus­tom­ers! Share your feed­back here on the latest change.

Or with Apple at http://​www.​apple.​com/​contact/​feedback.​html.​

Kobo con­tin­ues to de­liver the best read­ing ex­per­i­ence on the iPad and iPhone. Look for new and ex­cit­ing fea­tures in up­com­ing re­leases.

I don’t see any possible reason for that to be removed. The overall tone is surprisingly positive given the circumstances. So the removal must have been because of the comments, right? I think not.

Unfortunately there are far too many comments to re-post here. I skimmed through a bunch of them and most all express anger toward Apple for making Kobo change the app. But I didn’t see any with profanity or over-the-top hatred, just people expressing their opinions about the change, and a lot of people saying they’d be switching to Android for their next phone/tablet.

I decided to check the Kobo app on iTunes to see what the reviewers where saying, and there was one really interesting comment from a Kobo employee explaining Apple’s sudden rule changes. Here’s the entirety of a review posted from the Kobo iTunes description page, lest it gets removed or disappears somehow:

I work for Kobo, and it appears that this is the only means through which I can alert users to the reasons for the changes in the app I wrote. Every other mention has resulted in the app being rejected by Apple, even as they allow other applications to do so.

It should be noted that throughout this process we have worked closely with the App Review team at Apple to approve every change we have made. Those approvals were then rescinded at the request of the nebulous ‘from above’, i.e. someone further up the management chain.

I should note, however, that the Borders app for the US was subject to almost NONE of these restrictions. This is all the more amusing since the Borders US app is built from the exact same source code, with a different colour scheme and titles.

I’d like to take this opportunity to thank our contacts at App Review for their attempted help. They are obviously being placed in a very difficult position.

There you have it. Hopefully people will read this review and understand that none of the changes in v4.5.1 of the Kobo app happened by our own design. We have always intended to provide users with the best experience possible. It looks as though that is not allowed now; our every attempt to provide guidance to our customers has resulted in the rejection of our app. For that I am truly sorry.

Note the part about not being aloud to say that Apple required the store removal or any mention of ‘compliance with App Store guidelines’. I think that says it all. And isn’t it interesting that the Borders app wasn’t subject to the same rules.

In response to the new app changes, Kobo has announced that they will be releasing an HTML5 app later this year to circumvent Apple’s in-app purchasing rules. But for the time being they have to remain on Apple’s good side, and do whatever Apple says.

Update: Kobo re-posted the page on their blog. The comments are gone, however. The content is the same but the title is slightly different. It is now Changes to your iPad/iPhone App Experience instead of Changes from Apple affects Kobo’s iPhone/iPad App.